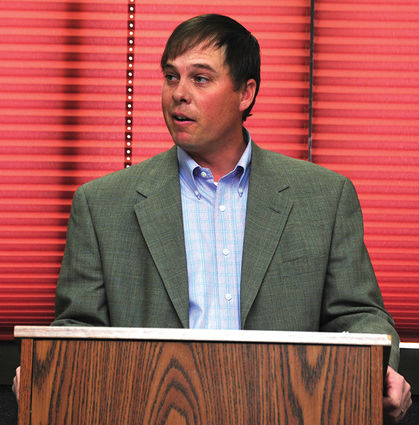 WORLAND - As a member of the Collaborative Task Force on Outdoor Recreation, State Sen. Wyatt Agar, R-Thermopolis, has become well versed in the topic.

During the Worland-Ten Sleep Chamber of Commerce networking and awards luncheon Wednesday, Agar spoke on the task force's work and the importance of outdoor recreation. He said as a citizen legislator, one becomes fully versed in areas you never thought you would.

"If you would have told me three years ago that I would be standing here today, speaking to you about an outdoor recreation collaboration, which I have been part of, I most likely would have laughed. However, after being elected, I started to study different parts of our economy that paid the largest dividends into our budget. And, while our legacy industries of ag and energy lay enormous part, tourism and outdoor recreation do as well," Agar said.

According to the task force's report published in October 2017, "Wyoming has the potential for significant recreation and tourism development. An emphasis must also be placed on innovation and recruitment while maintaining key industry resources (wildlife, natural features, cultural and historic sites, scenic vistas, and more). These steps can aid expansion and revenue generation.

"According to a 2016 Outdoor Industry Association (OIA) report, outdoor recreation in Wyoming generates approximately $5.6 billion in annual consumer spending, $1.6 billion in wages and salaries, and $514 million in state and local tax revenue. It accounts for 50,000 jobs. For every dollar spent directly on outdoor products, four dollars are spent on food, lodging, and transportation. Despite these impressive numbers, Wyoming's outdoor economy trails its neighboring states, except North Dakota and South Dakota, by roughly $1 billion. Wyoming has the potential to become a regional leader."

Agar said that Wyoming Governor Matt Mead has identified outdoor recreation as one of the under developed assets of the state and more specifically the Big Horn Basin.

Agar said, "To quote him, 'The Big Horn Basin offers a premier but underdeveloped destination for outdoor enthusiasts of a variety of disciplines,'" which led to the formation of the task force.

The task force found that outdoor recreation is growing at a rapid pace in Wyoming with a 13 percent increase over the last four years on dollars spent; 78 percent of the primary businesses within the industry have introduced new products in the last four years and 67 percent have more expansion planned, according to Agar.

Following the task force report, Gov. Mead created the Office of Outdoor Recreation with the Wyoming State Park department and the Big Horn Basin was selected as an outdoor recreation collaborative pilot project.

The first meeting for the project was last Saturday and Agar said there were three major goals or tasks for the day:

•To look at the South Big Horn Basin regionally and begin to develop a master plan for the area. Each community was asked to go home and make a list of three outdoor recreation projects that would stimulate the economy, but also be beneficial to the entire Basin.

•Determine how to bridge the gap between the local projects and federal partners. "Over 75 percent of the Basin is public lands, which is a great asset, but also comes with restrictions. One of the biggest problems what we face in the development of the recreation industry is the red tape from the federal level - how long the permitting process takes, maintenance on trails once they are established and what is responsible use of our resource," Agar said.

He added that other placed have had similar problems, including Moab, Utah, and been able to overcome them.

"With cooperation from our local land management offices, I am sure we can too," he said.

Agar said he likes to use Moab as an example because they have been able to develop bike trails and hiking trails and other outdoor recreation opportunities that have "become a huge industry inside that community."

•Determine how to best optimize on the demand that is already here, "whether it is rock climbing in Ten Sleep, off roading in the Basin, fishing our blue-ribbon streams or enjoying a world class golf course here in Worland." Agar said, "We have the product, we have the potential, how do we develop and market it better, without affecting or losing the clientele we already have."

He said members of the Thermopolis and Hot Springs State Park community are working with backcountry bikers to establish and market trails on neighboring Bureau of Land Management land, with no impact to agriculture.

Regarding Boysen State Park, he said he was notified by the Wyoming Office of Tourism that the tribal government on the Wind River Reservation has reached out with a willingness to develop opportunities on the Wind River.

Agar said in an interview Thursday, "I'd never spent a whole lot of time thinking about the multi-dimensions of outdoor recreation. We can put in a trail that horses can use, at the same time, bicyclists can use, hikers can use. There's so many layers we can accomplish with one investment."

As the communities move forward, they need to answer two questions - what do they want outdoor recreation to look like in the South Big Horn Basin 10 years from now? How big of an impact do we want it to have, not only on the economy but also the way of life in the area?

Agar concluded his comments stating, "Is outdoor recreation going to answer the problem of the slow down of our economy in the Basin? Not completely, but it can play a part. When you couple that with the possibilities of Ag ENDOW [Economically Needed Diversity Options for Wyoming] and the specialized marketing of our ag products, the sky is the limit."