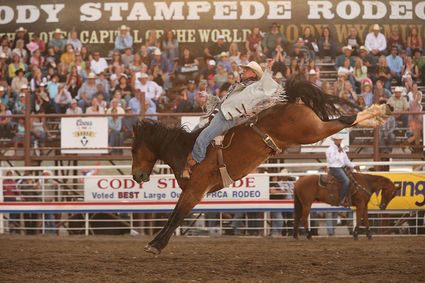 That should not be an issue this summer as Cody begins the 80th anniversary season of the nightly show that dates to 1938.

From June 1 through Aug. 31, rodeo will take place at Stampede Park nightly, the 90 days' worth of performances being a main reason Cody can call itself "The Rodeo Capital of the World."

Among those scheduled to coach in Cody for a week or two at a time in June, July and August are Heath Ford (twice), R.C. Landingham, Mark Garrett, Rick Smith, Paul Peterson and Jess Martin.

The goal is to help ensure the future of the sport and bring together teaching and opportunity for aspiring rodeo participants who might not otherwise be able to compete near their homes.

"It's a way to help generate and create some more horse riders," Tate said.

A week before the season's start, Tate said there were commitments from young riders between the ages of 15 and 25 to spend a chunk of the season in Cody.

They are coming from Australia, Tennessee, Oklahoma, Texas, Pennsylvania and Florida, some for the whole summer and some not until college and high school finals rodeos end. Tate said he had an inquiry from Brazil.

"We sent a letter to every college coach in the nation," Tate said, and added he knows some young local cowboys will want to sign on too.

Livestock is in place at the corrals at Stampede Park and the arena was being spruced up this week in preparation of opening crowds.

Justin Josey, better known to fans as a bullfighter, was driving a mini-grader to begin smoothing the muddy and wet surface.

Dusty Moore, in his eighth season as a pick-up rider and roper, was taking care of the animals, his jeans and shirt flecked with mud.

"It's always fun to come back and see everybody," Moore said of another season in Cody.

The new blood will mix with regulars like Moore and Josey and one way the cowboys coming to town to improve riding skills will be made comfortable is through "Preacher" Pat Alphin, who operates Cowboy Church on the North Fork.

The church on his five-acre property has a bunkhouse large enough for 10 cowboys to reside and he is providing the space for free. The cowboys will have access to a kitchen, showers and a group living room.

"We'll feed them every now and then, but mostly they'll buy groceries," Alphin said.

Alphin, 62, is a former bull rider and saddle bronc competitor who began counseling cowboys in Cody three seasons ago, with his wife Renee videotaping performances for Cody Nite cowboys and cowgirls to study.

Tied in with this program, Alphin said he will invite competitors and coaches to morning-after video review sessions at the church to go over the preceding night's action.

"Cowboy Church has been a huge asset for us," Tate said.

Tate used the same description about how a program like this could impact rodeo.