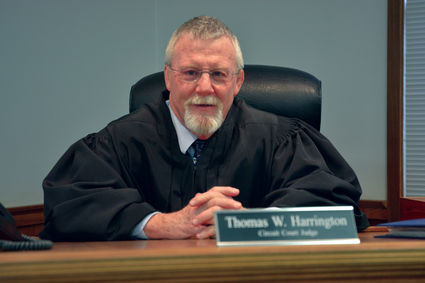 A 1970 graduate of Worland High School, Harrington first received a teaching degree from Boise State and University of Wyoming before becoming a social studies teacher and wrestling coach in Worland.

The grandson of a Basin lawyer, Harrington decided to go back to school in 1991 and gain a law degree, serving as Washakie County Attorney from 1994 until 2002, then practicing law in Hot Springs, Washakie and Big Horn counties before being appointed to take over the Circuit Court from Judge Robert Skar in 2008.

Scheduled to retire from the bench on Jan.7, Harrington has had time to watch the legal process change, along with the variety of cases.

"You see this thing," asks Harrington as he taps at a computer monitor on his desk in his chambers in the Washakie County Courthouse. "This thing has changed things. I was reading a report the other day, and when you turn this thing off, it still affects your brain. You're still processing. So kids these days, with the computer and video games and the phone, they're unable to disengage so they go looking to keep that feeling and end up with things like Fentanyl, which is creating a huge problem in the courts."

Sitting back, Harrington also examines the flip-side to technology, and the ramifications to the legal system.

"Another thing is that they are having arraignments over the computer now, the defendant never has to leave the jail. That's a problem when we don't see the people that we serve. You can't read body language or gauge mood, all of those things that are critical to being a judge in this system. It's tempting to go that way, but public servants should work toward what's best, not what's convenient."

Harrington noted that during his exit interview, he advised his successor, Judge Edward Luhm, to avoid video arraignments, and to "keep it real."

After retirement, Harrington intends to become more involved with the county's Victims and Witness program, volunteering his legal services pro bono to make sure victims are served by the law through the state's Ameritas program.

"I would also like to become more involved with the coaching program to mentor young men into making the right choices," said Harrington, currently an assistant wrestling coach for the Worland High School.

Harrington has a deep belief that outside influences, including sports and mentorship, can help alleviate many of the problems exhibited by youth he sees in the court system.

"I ran into a family the other day in the store that came all the way here from Europe just to camp in the Bighorns. In the middle of winter. Now, we have kids right here that never leave the house and then think they have to find some sort of stimulation that often gets them into trouble. There's no excuse for that. There's literally no excuse for that in this environment, you can't go out and become or do anything you want."

Of his time on the circuit bench, Harrington has the most praise for his staff.

"Bigger courts have 5 or 6 clerks and a manager of some sort. We have two. They do as much if not more and have never dropped the ball. I'm most proud of that."

After a retirement party on Jan. 4, Harrington will be replaced on Jan. 7 by Judge Luhm, a former hearing examiner for the Office of Administrative Hearings, Worland Municipal Court Judge, District Court Commissioner and Circuit Court Magistrate.

A fan of the Coen brother's film "The Big Lebowski" (he named his two dogs after the main characters), Harrington said that he may take it easy for a bit after retirement.

"I'm no carpenter, like Judge Skar, but I plan on shuffling around the house and getting a few things done that I've been putting off."