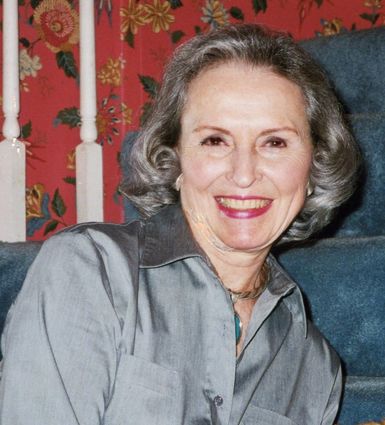 Jeanne Ann (Follett) Enos passed away at her home on December 25, 2018, she was 93 years old. Jeanne Ann was born in Topeka Kansas on September 28, 1925 the daughter of Walter C. and Margaret Jean Follett. She was predeceased by her loving husband, George Joseph (Joe) Enos in January of this year. She and Joe had been married 72 years. Her younger sister Kathleen preceded her in death. She is survived by her daughter Elizabeth Ann Eppes of Georgetown TX along with 2 nieces and 1 nephew.

Jeanne Ann graduated from Arkansas City (KS) High School. She worked during the summers and for a year after high school as a dental hygienist at McConnell Air Force Base, Wichita Kansas, until she earned enough money to go on to the University of Oklahoma where she graduated with a Bachelor of Fine Arts Degree. While at OU she joined the Chi Omega Sorority, became its president during her senior year and met and married Joe who had just returned from WWII. Together Joe and Jeanne Ann lived in Oklahoma, Kansas, Louisiana, Colorado, Utah, and Wyoming, and the countries of Lebanon and Singapore while Joe worked in the oil business; they finally settled in Houston and then Conroe TX in 1973. Joe and Jeanne Ann were among of the first residents of River Plantation Golf Club community where they met many, many dear friends. While Joe supported the family in the oil business, Jeanne Ann provided a lovely home wherever they went and periodically taught private art classes and always had a canvas on the easel. Joe and Jeanne Ann had a wide circle of friends and loved to entertain. Jeanne Ann was the original "Martha Stewart" when it came to painting and creating – if she didn't like the color, she painted it a different color; if it needed more height, she built new legs; if it needed doors, she built new doors....her whole life was literally a 'work-in-progress'....

A celebration of Jeanne Ann's life will be held at Metcalf Funeral Home in Conroe, TX on January 17, 2019 at 2:00 o'clock. Later in the year Elizabeth, will take her parents ashes to Worland, Wyoming where they will be interred in the Columbarium at St. Alban's Episcopal Church; Jeanne Ann and Joe were long time members and helped to build the 'church on the hill'.

Elizabeth would also like to extend a Big Thank You and Lots of Love to Monica and Mike, Sheila, Tillie, and Brenda for the love and care they gave to her parents. Your kindness will never be forgotten.

Online condolences may be left at http://www.metcalffuneraldirectors.com. Memorial donations may be made in her honor to the University of Oklahoma – http://www.ou.edu/give.