A family finds a message of kindness after tragic loss 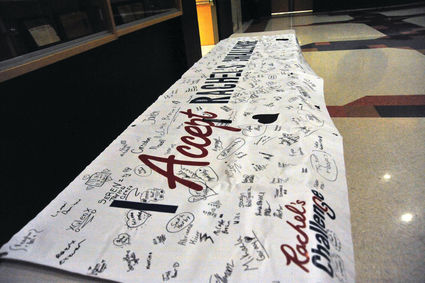 The Worland Middle School banner has names of students who signed up to accept Rachel's Challenges that were presented during a program Wednesday at the school.

He nearly lost his nephew Craig and his daughter Sarah, both who were in the line of fire of the two teenaged shooters that day. Sarah was ushered out of the cafeteria by Dave Sanders, the only teacher who was killed on that tragic day.

Scott spoke with parents and community members Thursday night as part of the Rachel's Challenge program that the Worland school district brought to Worland Middle School and Worland High School. He said he is the only member of the family who speaks to students. His brother Darrell, Rachel's father, takes the program to adults and, he noted, Darrell Scott will be speaking to Congress in March.

Scott spoke about the tragedy that unfolded on that Tuesday in Littleton, Colorado, and the impact it had on his family.

Rachel was sitting outside of the high school during lunch with a friend when the two teenaged shooters approached the school, killing Rachel and then her friend before entering the school. Larry Scott said the two had placed pipe bombs around the school but they failed to go off. The plan had been to shoot students as they exited the school. Instead they entered the school and ended up killing 12 classmates and one teacher and wounding dozens of others.

Larry Scott said his daughter Sarah had to run for her life when the shooters approached the cafeteria where she and many of the students were. The shooters were focused on hitting propane bottles that they had placed there earlier in the day.

His son Jeff was in another part of the school and did not see or hear anything.

He said the teacher, Dave Sanders, is a hero to them, for having saved so many students, including Sarah.

"He was the only teacher to face those two shooters," Scott said. He said Sanders heard the gunshots, saw the shots that killed Rachel and then he ran to the cafeteria and told the

Sanders faced the two boys on the stairs later, asking them to stop and drop their weapons. When he realized they wouldn't, he turned and ran and was shot three times in the back.

The shooters then went to the library, where Larry Scott's nephew Craig was at with friends. In videos shown Thursday night, Craig said their teacher told them to get under the tables and he went under a table with his friends Isiah and Matt. The shooters came in shooting and approached Isaiah, one of the few black students at Columbine. They yelled racial slurs at him

before shooting him. They then shot and killed Craig's friend Matt. As Craig felt he was going to die the fire suppression system came on distracting the shooters and they never turned their attention back to him.

After killing 13 and wounding 27, the two shooters took their own lives.

"We thought something like this would never happen in Littleton, Colorado," Larry Scott said.

Rachel's Challenge was inspired not only by the life led by Rachel Scott but also by her essay "My Ethics, My Codes of Life" that she wrote about six weeks before her death.

She wrote, "I have this theory that if one person can go out of their way to show compassion, then it will start a chain reaction of the same. People will never know how far a little kindness can go."

Following her death, family and friends attested that Rachel's life was "committed to kindness."

They said she reached out to three groups in school, students with special needs, new students and students being picked on. Larry Scott told three stories demonstrating that, but noted there were many other stories that friends have told the family over the years.

One girl was a new girl at school and she was rejected by some girls when she tried to sit with them at lunch. Rachel, seeing her alone after that, invited her to sit with her and her friends. Being shy and reserved, the new girl turned her down. Rachel then brought her friends over to the new girl and they all had lunch together and started up a friendship.

The girl told the family that her worst day at Columbine became her best day because of Rachel's act of kindness.

Adam was born with special needs and had been picked on throughout his school years. Rachel intervened one day when he was getting severely picked on. Her actions saved his life because he had been planning his take his own life.

The five challenges issued Thursday night to the Worland community were:

No. 2 - Dream Big and Believe in Yourself.

No. 4 - Speak With Kindness

No. 5 - Start Your Own Chain Reaction

"Sometimes we take those we are closest to us for granted. Life is uncertain. Not one of us is promised tomorrow," Larry Scott said.

Worland Superintendent David Nicholas said, "We had almost 800 kids hear this program. It's impactful. This program is hard to escape. You're going to think about it tomorrow and if you're like me you're going to be thinking about it a couple months from now."

He added, "I heard a couple kids say after the program, 'That wasn't fun.' It's not that kind of program, but it is transformational."

Several people expressed that they were glad that the district and the board brought Rachel's Challenge to Worland.

Some were moved by the challenges that were offered, others were moved as they remembered when they first heard about the Columbine High School shooting 20 years ago.

Former teacher Jacque Pike said, "I was impressed. I've got grandchildren in school and I think this made an impact."

"Interesting" and "awesome" were other words used to describe the presentation.

Jay Richard said of the challenges issued, "I try to live by a lot of these. It was a powerful message," he said, adding that he wished more people had attended and heard the message. There were about 100 in attendance Thursday night.

About 800 students in WMS and WHS heard the message. WHS Principal Wade Sanford said, "The kids were very receptive. Their attentiveness was the best I've seen at an assembly."

Larry Scott said he had teachers come up to him and tell him that it was the first time they saw students come up to a speaker and thank them personally. 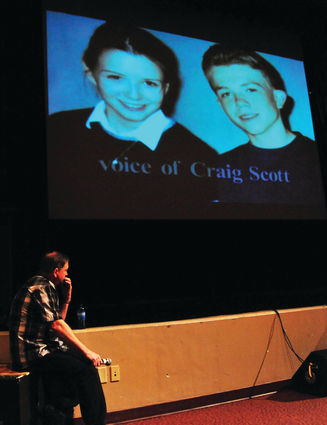 Larry Scott sits and listens to a video about his niece and nephew Rachel and Craig Scott during the community presentation of Rachel's Challenge Thursday night in the Worland Middle School Auditorium.

Sanford added, "When you talk about treating each other better, that's a message that's never wasted." He said he appreciates the administration and board support, as well as the support from Foster and Lynnette Friess to be able to bring the assembly to two of Worland's schools. The Friesses provided funding so districts could receive a discounted price to bring the assemblies to the school.

Scott said through the help of the Friesses they hope to go to every school in Wyoming.

Hailey Richard, who attended the WHS and community presentations said she was impressed with Larry Scott. "The confidence it takes to talk about something that tragic is amazing. It affected me a lot," she said.

As for the challenges, she said, "They're pretty easy when you know what you're doing, just be nice."

This is the first part of a two-part series on the community presentation Rachel's Challenge. The second part, discussing the five challenges issued to the Worland community will be published in Tuesday's Northern Wyoming Daily News.