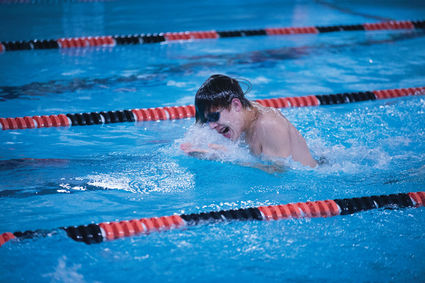 Warrior Stuart Trombley pushes ahead during the 100-yard breaststroke during the Warrior Triangular at the Worland Aquatic Center Tuesday night.

WORLAND - As shocking as it is, the final weekend to the Wyoming boys swimming regular season is here and today the Worland Warriors are in Gillette to close out the regular season strong and build momentum heading into conference next week.

Leading up to the meet in Gillette, the Warriors were in Lander last Saturday and held their final home meet of the season on Tuesday at the Worland Aquatic Center

"We saw some good times, no DQs and Andrew [Nelson] is still shaving some time. We're not seeing Zayne's [Cooper] best times yet but we're also going through the toughest part of the season," said WHS boys swimming coach Jeff Bishop about his team's performance over the past few meets.

The Warriors also just got through their hardest week of training in which their yardage was upped and they swam with shirts on. Setting new personal records this week isn't expected, yet, there have been positive signs that once Worland begins their taper, the time drops are going to be plenty.

"They weren't good times but we were watching Stuart [Trombley] swim and it looked like he was on vacation. He was calm on the block and had his board shorts on, but his time was only a second off from his fastest. So if he can do that in board shorts, holy cow, I think we can expect some good things," said Bishop.

Warriors freshman diver Simon Dalebout continues to make improvements on the board and Tuesday night kept on track with his upward trajectory.

"He threw some really good dives on Tuesday," said Bishop. "One of the Powell divers barely qualified by one point, he is a freshman, and Simon and I were talking about how cool it's going to be that there are four freshmen from Powell and Simon. They're going to compete against each all the way through, they're going to grow and only get better in their diving. That's really exciting."

Aside from three 3A teams and one 4A team, the rest of 4A and 3A swimming is in Gillette today, because the Campbell County Aquatic Center is the site of this year's 4A and 3A State meets and many teams are wanting to get a feel for the pool before state.

Bishop expects today to be full of entertaining races and getting the added challenge of going against 4A schools, is only going to make Worland that much better. The Warriors swimmers can pick up a few techniques from the 4A swimmers that could help them come time for the 3A East conference meet in Newcastle next weekend.

"We get to swim against 4A schools which is a good thing for our boys. If you look at the 4A State qualifying times they're considerably faster than ours but our boys can possibly pick up a few things from watching those 4A swimmers."

Added Bishop, "Everything is wrapping down now, we'll start out taper next week before conference, I'm sure the boys will like that. These last few weeks are going to be a fun time."