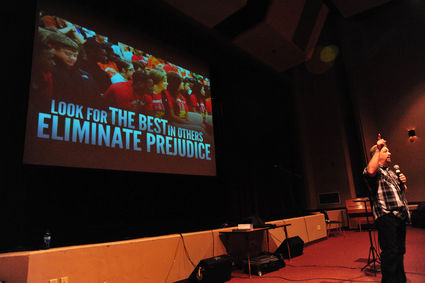 Larry Scott of the Rachel's Challenge program gives the first challenge to those in attendance at the community presentation Thursday night. About 100 parents and community members attended. Rachel's Challenge was presented at Worland Middle School and Worland High School Wednesday and Thursday, respectively. Friends of Rachel Clubs were formed at both schools.

Columbine High School student Rachel Scott was sitting outside the school having lunch on a Tuesday afternoon in April of 1999 when she was gunned down by two shooters. She was the first of 13 people murdered that day. Her family turned her life of kindness into a message to start a chain reaction in schools across the country.

Last week, Larry Scott, Rachel's uncle shared Rachel's Challenge with the middle and high school students in Worland, and to parents and community members in a public presentation Thursday night.

At the public presentation, Scott issued five challenges to the community.

No. 1 - Look For The Best In Others. Larry Scott said the first challenge comes in part from Rachel's brother Craig. He was in the library at Columbine High School, where 10 students were shot and killed and many more wounded. Two of the students shot were friends of Craig's. The three were huddled under a table together. The two shooters approached them and called Craig's friend Isaiah a bunch of racial slurs before shooting him with a shotgun. Craig's friend Matt was next. Craig was spared when the shooters were distracted after the fire suppression sprinklers were activated from the smoke from the gunfire.

Larry said Craig told him to make sure he tells students to get rid of any prejudices they may have.

The full challenge is to look for the best in others so you can eliminate the prejudices from your life. Larry Scott said prejudice means that people prejudge others based on race, gender, sexual orientation, but it can also be based on a person's attitude or a facial expression. People can judge someone by the way they look at them, or the attitude they take.

Rather than basing things on a first impression, Rachel Scott wrote to give people three chances before judging them.

Larry Scott said, "It's easy to see the worst in people especially when you see someone who doesn't line up to your standards." He added that however, often you have no idea what's going on in that person's life at that moment and thus you shouldn't judge someone when you don't know what's happening in their life.

No. 2 - Dream Big and Believe in Yourself.

Rachel wrote to her cousin, Larry's daughter Sarah, "Don't let your character change color with your environment. Find out who you are and let it stay its true color."

Rachel Scott wanted her life to have meaning, even as a young girl. Larry Scott showed a picture Rachel drew, tracing her hand and writing, "These hands belong to Rachel Joy Scott and will someday touch millions of people's hearts."

Larry Scott asked the audience how many people love hanging around positive people, with everyone raising their hands. No one raised their hand when he asked how many like to hang around negative people.

He said that yes, while the two shooters had been bullied, they made poor choices on how to deal with being bullied. He said they wrote, "We're going to get you back." They had wanted to kill 500 students and teachers even going so far as cutting pictures out of the yearbook to target practice. They planned the shooting at least six months prior to the shooting.

"We make choices every day. They chose Hitler as their influence," Larry Scott said. With that type of influence when it came time for them to choose how to respond to being bullied "they did something worse than what had happened to them," he said.

On the other hand, "Rachel was a life giver," Larry Scott said.

Rachel chose Anne Frank as a role model. Anne Frank wrote in her diary "I want to go on living even after my death." Rachel Scott wrote, "I'm going to have an impact on the world."

Larry Scott encouraged those in attendance to choose positive things in their life, whether it's role models, whether it is something or someone they listen to, whatever they read and whatever they may watch.

For parents, he emphasized that children are watching them for guidance and they can show them what choosing positive things in their life looks like.

"The choices we make today lead us to what we will do tomorrow," he added.

No. 4 - Speak With Kindness. For this challenge, Larry Scott again went to his nephew Craig Scott. Craig and Rachel's final words were one of conflict on their ride to school. He didn't realize they would be the last words he ever spoke to her.

Larry Scott said, "It matters what we say and how we say it. Words can hurt deeply or heal. It's our choice."

In a video of an interview with Craig, he says, "I had to choose to forgive myself. Rachel would have forgiven me."

Larry Scott said, "Don't go through life with unforgiveness toward yourself or others. Always forgive."

He added, "If you want peace in your home, speak with kindness and remember words are powerful."

No. 5 - Start Your Own Chain Reaction.

Rachel's Challenge began after her father Darrell Scott found her essay, "My Ethics, My Codes of Life." In it she wrote, "I have this theory that if one person can go out of their way to show compassion, then it will start a chain reaction of the same. People will never know how far a little kindness can go."

Larry Scott said people can start their own chain reaction by accepting the challenges.

He also told those in attendance not to take loved ones for granted.

A final challenge issued to to be a better person today than we were yesterday.

For the parents he said it would be a different world if every parent would tell their child as they left for school to please be kind to others.

In 2012 Rachel's Challenge conducted its own research by sending surveys to 20,000 students across North America that were involved in its programs the previous years. Nearly half of the surveys were returned.

Washakie County School District No. 1 Superintendent David Nicholas first heard the Rachel's Challenge presentation in November and said in an earlier interview, "When you walk away from that, I was rethinking everything, about how I act and talk with others. It was impactful."

"I think this story will touch our Worland community in a profound way," Nicholas said. He added if Worland can meet the challenge of showing compassion, learning from their mistakes and forgiving themselves and others and to dream big and start their own chain reaction of kindness and compassion, "that just makes Worland better, makes our school better, makes all of our lives better."

This is the second part of a two-part series on last Thursday's Rachel's Challenge presentation. The first part was published in Saturday's Northern Wyoming Daily News.