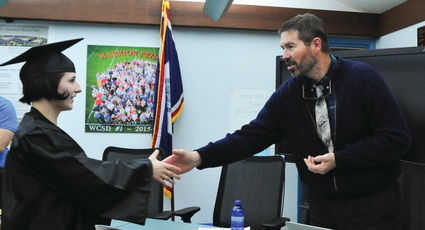 WORLAND - Four members of the Class of 2019 graduated early in a ceremony Monday night, prior to the commencement of the regular meeting of the Washakie County School District No. 1 Board of Trustees.

A graduation party/reception for the graduates and friends and family was held prior to the board meeting in the central office. After acting chairman David Tommerup opened the regular meeting, the graduates, donned in cap and gown, were presented their diplomas by board member Dean Dupree and offered congratulations by the other board members and members of the administration.

The ceremony was the first following new, early graduation rules put in place this year. 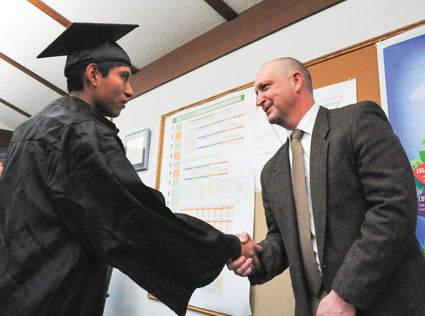 Worland High School Principal Wade Sanford explained in an earlier interview that the previous procedure if seniors wanted to graduate early was that they had to petition the principal and board by Nov. 1. He said the new proposal would require the notification midway through the first quarter in order to give more time for the students to meet the graduation requirements and allow the school time to assist and monitor the students. This school year that date was Sept. 20, 2019.

Under the new policy, students graduating early will not be allowed to go through any graduation ceremonies in the spring. The students would be honored by the board at the regular January meeting as the four were on Monday.

Sanford said most students wanting early graduation have a plan for trade school, college or employment right after graduating. He added that early graduation would require parental permission if the student is not 18.