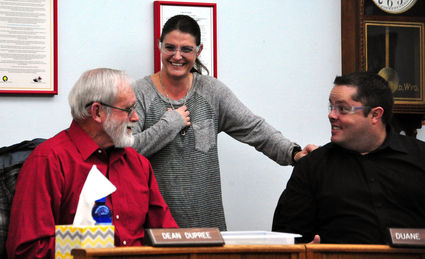 Washakie County School District No. 1 board members Dean Dupree, Sarah Lungren and Duane Whitlock share a laugh before participating in an A.L.I.C.E. training demonstration at Monday's board meeting.

WORLAND - The Washakie County School District No. 1 Board of Trustees discussed several school safety items and took part in a brief A.L.I.C.E. training.

Superintendent David Nicholas, West Side Principal Bruce Miller and Worland High School Assistant Principal Brian Gunderson went through the A.L.I.C.E. training in Riverton recently and have been conducting trainings for staff, students and parents. They provided a brief training session for the board and those in attendance at Monday's regular board meeting.

A.L.I.C.E. stands for Alert, Lockdown, Inform, Counter and Evacuate. According to the alicetraining.com website, A.L.I.C.E. training classes, "provide preparation and a plan for individuals and organizations on how to more proactively handle the threat of an aggressive intruder or active shooter event. Whether it is an attack by an individual person or by an international group of professionals intent on conveying a political message through violence, A.L.I.C.E. Training option based tactics have become the accepted response, versus the traditional 'lockdown only' approach."

The three Worland trainers went through each piece of A.L.I.C.E. and then conducted a demonstration of the two techniques.

Alert. Nicholas said, "We tell our kids, 'if you see something say something." He added that A.L.I.C.E. training includes knowing what is around you, be situationally aware and know if a student is in trouble.

"Ultimately we are as safe as our community. If someone is emotionally-ill we should know," Nicholas said.

Lockdown. Nicholas said, "If you get the door locked the chances of survival are pretty good. Safety is going to weigh higher than convenience."

He demonstrated ways to lock the door or keep out an intruder using a cable, by wrapping it around the door knob or the door closer. Students and staff can also stack chairs, desks or tables in front of the door to prevent an intruder from entering.

Information. Gunderson said under the A.L.I.C.E. training they get information out to students as fast as they can. Before, he said it was lockdown and out of sight. Now we let them know where the shooter is. If the shooter is by the math wing, students and staff in the science wing know they can escape.

The central office has access to each school's intercom and camera security system.

Counter. According to the A.L.I.C.E. website, "Counter is create noise, movement, distance and distraction with the intent of reducing the shooter's ability to shoot accurately. Counter is not fighting."

Nicholas said part of the movement can be throwing things at the shooters to distract them. In setting up the demonstration, he said a group could surround the attacker. He noted that when President Ronald Reagan was shot, the Secret Service agents did not fire a shot at the shooter but instead surrounded him and tackled him.

Gunderson said, "It isn't wrong to hide if you don't get found."

Evacuate. Miller said the students have been given permission in the case of an emergency to leave campus.

Gunderson noted under lockdown method for an active shooter there was no escape.

Nicholas set up a demonstration of the lockdown method and the A.L.I.C.E. method. A "shooter" armed with a NERF gun entered the board room and people hid by chairs and behind the board member desks. Of the 15 participating, the shooter shot 13 in 18 seconds.

The participants were then asked to use the A.L.I.C.E. training. One participant moved quickly to the door when they had the signal of shots fired. When the shooter entered she grabbed him by the legs so he could not move into the room, others hollered and threw things at the shooter to disorient him. He was able to get off a few shots, only hitting one of the 15.

Nicholas said he had one parent tell him that her daughter came home after the A.L.I.C.E. training and told her she was not scared, she was prepared.

In other security measures, the board is reviewing the architect recommendations for entryway protection. Nicholas said he would like to start at the high school first.

Business Manager Jack Stott said the work at the high school would be more extensive than the other schools. The work would be phased in. He said the vestibule would be expanded and communication system would be in the vestibule to the office. "Until you are cleared you will not be allowed into the rest of the building. This will be the general mode of operation at all schools by the time we get done."

Stott also reported that they viewed a webinar on the Raptor web-based visitor management system for screening visitors that come to the district facilities. He said he liked the system better after the webinar and said it was not as cost prohibitive as they previously thought.

The visitor management system screens visitors entering each school. He said they can custom the screening to include custody issues and substitutes. He said it automatically screens through the sex offender list.

Stott said they are looking at bollards in front of the entrances at some facilities, as well as improving Americans with Disabilities Act accessibility.

Nicholas said in addition to the work on buildings and using a new method if there is an active shooter, the district is looking at other things including bringing in Rachel's Challenge last week. "As we treat each other with dignity and respect makes a huge difference in culture and climate."

During other business Monday night:

The Student Council is also raffling off five parking spots closest to the rear entrance of the school. Students who don't win the raffles, and who park in the designated spots, could face detention.

The Student Council will also be raising money for Make-A-Wish by having students "vote" on which teacher gets to play egg roulette. Voting occurs when a person puts money in the jar with the teacher's name. The teacher with the most money wins. Egg roulette is when there are four raw eggs hidden in with hard-boiled eggs and they are cracked on the teacher's head. Funds are given to the Make-A-Wish Foundation.

•Washakie County Extension Educator Caitlin Youngquist spoke to the board about the community garden at Newell Sargent Park. She said they would like to increase the use and they have had Worland Middle School summer classes work in the garden in the past. She said she would love to have more classes involved if possible.

Youngquist also told the board about an opportunity for high school and middle school students to visit with college recruiters and industry professionals at the annual Youth Career Event Feb. 12, part of the WESTI Ag Days in Worland at the Worland Community Center. The dinner is free and begins at 5:30 p.m.

•The board approved the list of fall coaches for the 2019 season. All head coaches remain the same as this current school year. 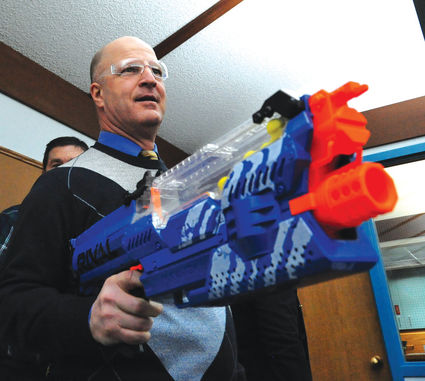 Washakie County School District No. 1 Business Manager Jack Stott was the "shooter" during the A.L.I.C.E. demonstration at the board meeting Monday in the central office.

•The board declared a 2005 Dodge Grand Caravan as surplus property to be sold.

•Two out-of-town trips for music students were approved for next school year, to the Holiday Bowl in California in December and to the Denver Center for Performing Arts this summer.

•West Side Principal Bruce Miller reported that there were 51 students with perfect attendance in the second quarter.

•WHS Activities Director Mark Mortimer reported that (as of Monday) the regional basketball tournament hosted by Worland was 31 days away.

•The board awarded the bid for e-rate project to Pine Cove Consulting. The project will cost just over $72,400. Technology director Kathy Wise reported that the district has $54,000 in e-rate funds for the project that includes replacing wireless access points, moving them from the hallways into the classrooms; and for the annual management contract.