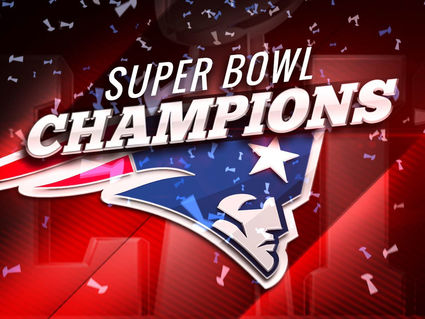 Sports Editor's Note: There will be some weeks "Hear Me Out..." won't fit into the physical print or online edition of the Northern Wyoming News. In those instances, the column will still be posted to the website.

If Alanis Morissette did a remix of "Ironic" I think it'd go something like this:

To make high scores the rule of the land

And during the NFL's biggest game of the year

Two of the league's best offenses scored a combined 16 points

Isn't it ironic, don't you think

Doesn't quite roll off the tongue and not as catchy as the original, but then again, what remix ever lives up to the original.

Super Bowl LIII was a giant letdown and is in the running for worst Super Bowl of this century. For me, Super Bowl XL still holds that title because those refs were gunning for that MVP trophy.

Sunday's game felt a lot like a World Series game, in that you see the chess match between two managers play out right before you. And that's fine for baseball and football is that way to a degree, but after a certain point in football, guys make plays that can't be drawn up.

Some are already piling on Rams coach Sean McVay and questioning his genius. It's no secret Bill Belichick outcoached his counterpart, McVay admitted as much and put the Rams loss squarely on his shoulders. Yet, I think he took too much of the blame. If I'm a Rams fan, I'm terrified about next season and that's not because people might catch up to my coach, he'll be fine. It's the guy that's under center, Jared Goff, that has me concerned.

Tony Romo pointed this out during the broadcast that Belichick showed one look on defense, then at the 15-second mark on the play clock, when the QB-coach mic cuts out. He'd have his defense go into their actual set to confuse Goff. It was genius and shows you that if you go at the king, you best not miss.

Goff was completely lost and had no idea what to do. Until McVay figured out what Belichick was doing, Goff was indecisive and just plain lost. That's why the Rams punter, John Hekker, was their game MVP.

I do think it's hilarious that Saints fans are talking how they'd have beaten the Pats, as they grumble about missed penalties. They need to calm down because the Saints couldn't beat Jared "I need my coach to tell me where to throw" Goff, at home and getting the ball first in OT. Let it go Saints fans, your team lost, just move on.

Even if the Saints did get to the Super Bowl, they would have lost just like the Rams did. This Pats dynasty is like hybrid of Jason Voorhees, Freddy Krueger, Chucky, Michael Myers and every demon ever in "The Conjuring" universe. They're invincible and they're never, ever going to die.

Edelman was great and earned the Super Bowl MVP, but we have to pump the breaks on this Edelman to Canton talk. This is recency bias run amok. He belongs in whatever the Patriots Hall of Fame is but isn't a gold jacket dude.

In an era in which the rules were changed to boost passing numbers, Edelman can't put up big numbers. Even Lynn Swan, who played in a much tougher era, has better numbers than the Pats WR.

Edelman's never made an All-Pro team and never even made a Pro Bowl team. He hasn't made a single Pro Bowl, even with Pats fans flooding the voting, Edelman still couldn't get in.

For those fantasy football players out there, I have a question for you. Have you ever taken Julian Edelman and been excited, and excited like he's going to be my No. 1 WR on my stacked team excited?

The answer is rhetorical, because no one, not even a Pats fan, has been ever been hyped to have Julian Edelman on their fantasy football team. The only reason you take him is because there are 15 seconds on the clock and you have to grab someone before the computer auto drafts a kicker for you in the seventh round. And when he's on your team you hope and pray that you play him during those two games of the season where he puts up a solid game, provided he's healthy or not suspended for PEDs.

Super Bowl LIII was a turd of a game and proves that the city of Atlanta can have nothing but heartbreak and/or misery when it comes to sports. We just need to accept it and move on, there's no need to drum up talking points, like if Edelman=Hall of Fame, that have obvious answers. No Edelman doesn't need to be fitted for a gold jacket, he's not even the best slot WR in Pats history.

Now let's all move on to basketball.