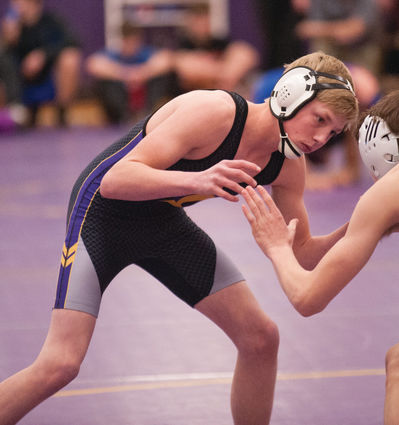 THERMOPOLIS - Coming off their first-place finish at the Greybull Memorial Invitational on Feb. 2 at Greybull High School, the Hot Springs County High School wrestling team wants to use this final week of the regular season to make their final adjustments before the start of the postseason next week.

Watt, Cole and Ferree did their jobs as the 'Cats got three wins all by pins.

"Coming down to those last three matches we were down 12.5 points. As a coaching staff, we didn't make a big deal out of it, we just told them to go do their jobs and they knew that we needed pins. And all three got pins and it was pretty impressive how they accomplished that," said HSCHS wrestling coach Travis McDermott. "We were missing some kids but I think that's where the tougher competition with the Ron Thon, Shadow and others. Our guys have upped their game and know how to finish matches."

The 'Cats had eight wrestlers finish third or better, and had four win their respective weight classes.

•113-pound Austin Ireland first place with a pin vs. Malachi Lane of Shoshoni in the finals.

•145-pound Jeffery VanAntwerp second place, lost to Tryston Truempler of Shoshoni by 12-10 decision in the finals.

•195-pound Chance Watt first place with a pin vs. Greybull's Tate Clutter in the finals.

"Remington Ferree has grown immensely throughout the season and really got some confidence from winning the JV tournament at the Ron Thon. [In Greybull] He went out there and was just a beast, he was attacking and going after guys. He wasn't tentative like he was at the start of the season, he's definitely made improvements.

"Jeffery VanAntwerp made impressive improvements as well and wrestled in one of the better matches of the tournament. Austin Ireland rolled through the tournament and got a pin in each match. Chance Watt won and dominated everybody, along with Logan Cole, those three guys pinned everyone," said McDermott.

Getting a team win like this, this late in the season is a big momentum boost for the 'Cats. And even better to McDermott was how his team is executing the detail better, like getting off bottom, chain wrestling or scrambling.

"We're getting better off the bottom and our scrambling is better. I really noticed it in a couple matches with VanAntwerp. He had one of the tougher matches of the tournament against Tryston Truempler and it was an exciting one at that. A lot of our guys were putting moves together and getting off the bottom better than they have," said McDermott.

Added McDermott, "There were some matches that could be seeding criteria for regionals but we're staying focused on our development as wrestlers more than looking at the big picture. Everyone wrestles different and we're trying to maximize what each of them can do."

The 'Cats end the regular season with two duals, Thursday they head to Worland to take on 3A's No. 4-ranked Warriors at 6:30 p.m. Then on Friday they go to Glenrock for a showdown with the Glenrock Herders. Both duals present unique challenges for the 'Cats and McDermott plans on being competitive in both, while also keeping an eye to the 2A West regional meet next week in Kemmerer on Feb. 15-16.

"Worland and Glenrock are going to be tough duals, we have to see what our personnel is going to be. We want to be competitive in both dual but we want to be healthy and prepared for next week. It'll be a mix of who we got and where we can wrestle," said McDermott. "The boys are competitive when it comes to these duals and they have been all year. They know if they go out and do their job, good things will happen."