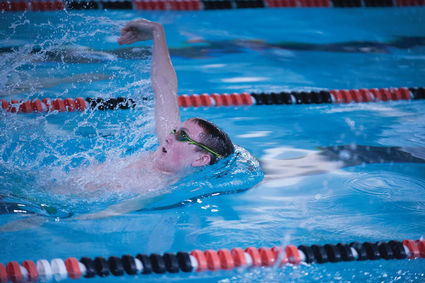 Warrior Traeten Quigley competes in the 100-yard backstroke during the Warrior Triangular on Jan. 22 at the Worland Aquatic Center.

WORLAND - Even without top swimmer Zayne Cooper, who was out due to injury, competing at the 3A East conference meet in Newcastle last weekend, the Worland Warriors still scored enough points to take third place with 169 points.

"It was a very exciting meet," said WHS boys swimming coach Jeff Bishop. "We held out Zayne as a precaution because he had hurt his shoulder. He should be ready to go for state next week."

"Our MVP for the weekend was Traeten Quigley. He got an individual second place, an individual fifth place, a relay second place and a relay third place. He was our high scorer for the meet and he's just a freshman. He also got down to 1:01 on his 100 fly and one of his season goals is to get under a minute. With our taper and Gillette being a fast pool I think he'll get there," said Bishop.

Blake Mautz continued to impress his coaches at the conference meet. Since his hip surgery, Mautz has only been able to do in-water starts and open turns in the 100-yard and 50-yard freestyle races.

Even with those hindrances, he's still posted strong times in both events, as a result, Bishop and assistant coach Justin Howe wanted to see how Mautz would handle a relay. They entered him in the 200-yard freestyle relay and the move paid off as the team took second place.

"We added a third event for him, he's been doing the 50 and 100, we added the 200 free relay just to see what we'd get. He still started in the water and did open turns and our relay still came in second. Just awesome, awesome things from him and more to expect from him next year," said Bishop.

Worland divers Diamond Hill and Simon Dalebout scored season highs for 11 dives. Hill placed third with 269 points and Dalebout was sixth with 203.45. Conference was the final meet for Dalebout as he didn't hit the 240 point state qualifying mark, but the freshman shows tremendous promise on the diving board all season long.

"Simon missed out on qualifying but did break 200 and set a personal record on 11 dives, which was great to see. Diamond qualified in 11 dives, which he didn't need but it's still good to have those scores. There were moments he was leading or in second, he's right there and state should be wide open. He also repeated his best time in the 500 too and he'll have two events at state," said Bishop.

All in all, it was a good meet for the Warriors and a good way to build momentum heading into the 3A State meet in Gillette on Feb. 15-16. One of the more memorable moments during conference was junior Andrew Nelson giving it his absolute all and leaving nothing in the tank.

"Stuart [Trombley] and Zach [Cole] both were awesome," said Bishop. "Andrew [Nelson] did amazing, he swam so hard that he puked. When a kid does that it's kind of scary at first but it lets you know that he was going as hard as he could," said Bishop.

The Warriors have the week off before the state meet, in which they'll use the time to fine-tune technique and continue to taper. Look for the Warriors 3A state boys swimming preview in next week's edition of the Northern Wyoming News on Feb. 14.