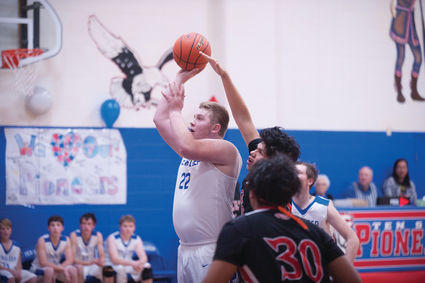 Pioneer Brody Tharp pulls up for a midrange jumpshot during a Feb. 9 game against St. Stephens at Ten Sleep High School.

TEN SLEEP - This season has been a struggle for the Ten Sleep High School boys basketball team, with only two seniors on the roster and the rest underclassmen they have taken their game in and game out. But last week the switch might have flipped for this team.

The Pioneers started the week scoring a season-high 60 points to beat the Dubois Rams 60-57 in Dubois on Feb. 8. Following that game they bested their 60-point mark scoring 78 in a 99-78 home loss to the St. Stephens Eagles. Now as odd as it sounds but that 21-point loss to the Eagles might have been one of the bigger wins for Ten Sleep this year.

Scoring has been a struggle for the Pioneers this season, so to score 138 points in two games and put up 78 against a quality team, mind you a program that has trounced Ten Sleep several times in the past, is a huge step forward for this young team.

"We talked about committing to run, that's something we're going to be doing a lot with these young guys in the future, and we did that. Staying with them [St. Stephens] in the third quarter was probably one of the bigger takeaways," said TSHS boys basketball coach Ben Schwarz talking about the St. Stephens game.

Ten Sleep never really allowed St. Stephens to get up too big, they even held a 26-23 lead at the end of the first quarter. The Eagles did take a 52-42 lead into halftime but in the second half, Ten Sleep was still right there with them, much to the Eagles frustration.

Not until the final three minutes of the game when the Eagles saw that triple-digits were within reach did they expand on their lead. And to do that they left one or two defenders at midcourt for an easy runout once they grabbed the rebound.

Another odd note about the St. Stephens game was the frantic pace actually helped many of the Pioneer underclassmen play with a calm to their game. They didn't wear the mistakes of a turnover or missed shot on their face. Good, bad or indifferent they went right on to the next play, and Schwarz believes that was a big key to their improved play last week.

"It helped out and that's something we've talked about a lot down the stretch. No matter the outcome of a play, good or bad, it should be about the next play. We'll keep pushing it, and down the stretch we'll see what happens. This Burlington game should be a telltale for us," said Schwarz.

Saturday the Pioneers travel to Burlington High School for a matchup with the 1A Northwest-leading Huskies. It will be a big test for the young Ten Sleep team to see if they can carry over the success of last week.

And since they are going to be in the 1A West regional play-in game Schwarz plans on using the regular-season finale as a means to try out the game plan they'll use for Dubois during the play-in game.

"We'll change things up in practice just to keep it fresh for them. We'll approach things we're familiar with but from a different angle. This week we'll have the Dubois game plan which is good because they're kind of similar to Burlington in that they both have a good guard and a good post. It's going to be nice to rep that game plan with Burlington," said Schwarz. "It's nice because for only having three wins they're the most excited and energetic I've coached. They know they can hang with Dubois and get into the tournament and from there, anything can happen."

As promising as the St. Stephens game was, it was also the final home game for seniors Brayden Fettig and Brody Tharp. The two seniors have been invaluable in helping their younger teammate along and shown excellent leadership throughout this tough season.

"It's bittersweet, it's sad to see a player like Brayden taking off and being done and having a presence like Brody has been great. They've done such an outstanding job with these freshmen and being patient. They came in and maybe not excited with them but now they're rolling with them and it's exciting to watch. We owe our seniors a lot for that," said Schwarz.