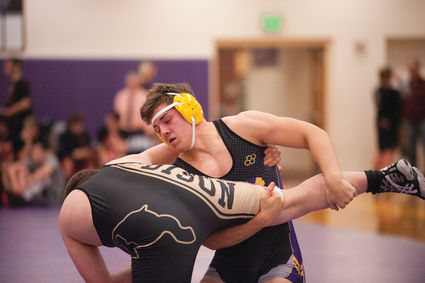 THERMOPOLIS - The 2A West regional wrestling tournament was going to be a battlefield, having four of the top five ranked teams competing for the top prize in the 2A West. The then No. 1-ranked Kemmerer were the favorites to claim the West's top prize, as the two-day tournament was held at Kemmerer High School. But the Hot Springs County Bobcats had other plans and ultimately played spoiler.

The No. 4-ranked Bobcats won the tournament scoring 186 points, besting second-place Kemmerer by 18 points and claiming their first regional championship in program history. Adding to it, they also had two regional champions in 113-pound Austin Ireland and 220-pound Logan Cole.

"We had a great weekend. With the championships going on I wasn't sure and I knew that we were up 30 something points and Kemmerer would have to pin out to catch us. Then when they missed a couple against Cokeville in the finals, it was pretty much wrapped up," said HSCHS wrestling coach Travis McDermott.

Going into the tournament, McDermott believed his team could finish second or third. Yet, to win the whole tournament he believed Kemmerer was the clear favorite.

But during the first round of the meet, as his team began racking up the pins, his opinion shifted from finishing third or second, to we can take this whole tournament.

"Going into it I didn't think we had what it took to beat Kemmerer because they do have some solid wrestlers that are going to win championships. But when we start pinning everybody in the first round, I thought this team is for real. It's hard to judge at certain points in the year but they showed up and went after people. We had 37 wins and 28 of those were pins, that was the difference, which is hard to maintain," said McDermott.

Cole and Ireland were the only 'Cats to win their weight classes and both were forces throughout their regional runs. Ireland pinned Wyatt Bolken of Greybull-Riverside in the quarterfinals, pinned Lovell's Cardon Mickelson in the semifinals and in the finals won a 5-0 decision against Kemmerer's Conner Vickery.

Cole also picked up pins in the quarterfinals and semifinals against Shoshoni's Jonathan Hilder and vs. Kemmerer's Thomas Archibald, respectively. In his finals match against Lovell's Coy Trainor, he won by 3-1 decision. While the score suggests a tight match, Cole actually controlled it wire-to-wire.

"Austin was just dominant, even in his championship match. The Kemmerer kid [Conner Vickery] was safe and not really engaging Austin, so he wasn't able to put up big points but he dominated that match too.

"Logan really went after Trainor and hit a takedown on him that might have rocked his world a little bit. It was a powerful takedown, he didn't score on it because he was on the edge of the mat but it was still pretty impressive. Logan just outwrestled him and even though the score was close he controlled the match," said McDermott.

Up and down the lineup the 'Cats had plenty of special performances and some of those that stood out were 132-pound Hagen, 152-pound Hunter Mounts, who jumped up to 152 for his team, 182-pound Christiansen and 170-pound Austin Barral.

"Jon Hagen started out the tournament with a pin and picked up some really good wins.

"Hunter Mounts, at the last minute bounced him from 145 to 152 which was a team sacrifice for him because he's been ranked at 145 but we weren't going to get any points at 152. We thought he'd be competitive there and he was. To get eight points and at the same time deny points to other good teams, really helped out.

"Cole Christiansen at 182 had a tough time because of a controversy against Kerry Powell from Lovell. We actually had to wrestle that match twice and beat him twice. After the first match was done we had pinned him but they found out that the proper weight time had not been adhered to, so they said that we had to re-wrestle that match. Cole won it 6-2, which cost us a couple points but for him to come out and win it again was big for him.

"Austin Barral beat a Cokeville kid in the consolations which was big and getting him to state was great too," said McDermott.

Winning the slugfest that was the 2A West regional tournament has given the 'Cats plenty of momentum heading into the final weekend of the Wyoming wrestling season. The chance for them to bring home the first wrestling title in school history is right there for the taking. To do so they have to, again, battle it out with their 2A West rivals as well as the Moorcroft Wolves.

The Wolves have won seven straight 2A State titles and look to extend their 2A record-setting streak to eight. Gillette holds the state record with 13 consecutive state championships, 2003-2015.

"We've talked about that all year long [winning the program's first state championship] but the important thing is that they know their jobs and what they have to do in each individual match. We've been focusing on that so that they don't get overwhelmed, especially stepping into the Events Center. It can be overwhelming for some but that's why we have to focus on the individual matches and try to win every one of them that we can and hope it turns out well for us."

Keeping the focus from match to match and doing their jobs in each match, just as they did at regionals, is the key for the 'Cats at state, but there's one other McDermott wants from his wrestlers. That being they have fun and enjoy the moment. All the stress about where the team is at in the standings and other stuff, that will be for him to worry about.

"We have six seniors and I want them to enjoy it and enjoy the moment because it's the last time they get to be on that mat. For our younger kids take it in, don't get overwhelmed by it and just have some fun. These guys have had fun doing this, they're not stressed out about where they're at. They just take it and run with every chance they get," said McDermott. "It's been fun, and nerve-wracking."

The 2A State tournament kicks off Friday at 9 a.m. at the Casper Events Center.