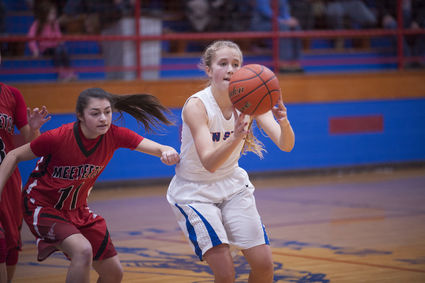 TEN SLEEP - The 1A West regional girls basketball tournament opens today at Lander Valley High School and the Lady Pioneers enter the tournament as the No. 2-seed out of the Northwest division.

The Lady Pioneers quarterfinal matchup will be against the Little Snake River Lady Rattlers the No. 3-seed from the Southwest division.

"I think we match up well with Little Snake. They got off to a tough start to the season, they're a young team but have been playing better of late. We'll see some zone against them and they've been primarily a zone team," said TSHS girls basketball coach Sarah Novak.

Coming off a 27-20 road loss to the Burlington Lady Huskies on Feb. 16, the Lady Pioneers are determined to put that regular-season finale loss behind them. As the score suggests, it was a tough night shooting for Ten Sleep, as Burlington packed their zone in the key and dared them to shoot.

"We were pretty sluggish and out of sync. Burlington did a good job defensively in their zone. It wasn't how we wanted the last game of the season to go but we still like where we are and who we are. So we'll take it from there," said Novak.

The goal all season long for the Lady Pioneers has to been to make it to state. Some of the other goals they've checked off, like getting out of the regional play-in game and finish the regular season with a winning record at 11-8.

In fact, this is the first Lady Pioneer team to have a winning record since 2008, and the expectations for this weekend are high. Bringing the pressure to regionals could be seen as a negative but it also means they have high goals and want the absolute best.

"We've put some pressure on ourselves this season, which we didn't have last year. Last season we were the underdog and our record wasn't very good, but we play good basketball at the right time. I think we know we're a pretty darn good team this year and there's pressure that goes with that. We just have to turn that into a positive thing.

"Our goal is to make it to the state tournament this year and it's a goal every one of us wants. Since I've been here we've always had expectations but nothing like this. We just need to have fun and play the game and we'll be fine," said Novak.

Novak and her assistant coach Hallie Caines have mapped out the possible paths to state for the Lady Pioneers. Both are plausible for them to solidify their spot among the final eight teams in 1A, but the best road is to beat Little Snake River and go from there.

"[Assistant coach] Hallie [Caines] and I have talked about it. If we beat Little Snake we'll likely see Cokeville. They're a very good team and that will be a good, tough battle," said Novak. "If we drop down, we'll meet Meeteetse and have our work cut out for us to get to state. I think getting that first win would be huge for these kids. It's a lot of extra work coming around the backdoor but if we can get that first one, it will relax the kids some."

The Lady Pioneers tipoff against the Lady Rattlers at 2 p.m. at the Lander Valley High School auxiliary gym.