No. 4 Warriors place second at 3A East regional meet 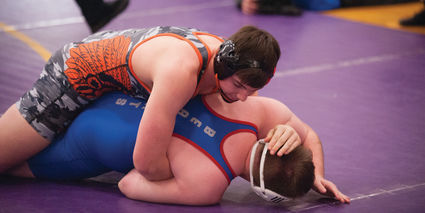 WORLAND -The Worland High School wrestling team was unable to defend their 3A East championship from a year ago but the Warriors were able to leave Rawlins High School on Feb. 16 with a second-place finish and three individual champions.

The No. 3-ranked Douglas Bearcats finished first with 258 points and the Warriors came in second place with 195. Worland edged out host Rawlins High School for second, who came in third with 194 points.

"I'm really ecstatic finishing second. Our kids wrestled really, really well. We took 25 kids and we'll be taking 20 to state, that's always good to see. The icing on the cake was we came home with three champions," said WHS wrestling coach Josh Garcia. "Domanic was excellent all weekend along. Adam, one of our seniors, had a great tournament and things are really clicking for him. Isaac, another one of our seniors, also had a great tournament."

"Luke Goncalves and Daniel Weyrich were in the finals and ran into some tough kids. Having that many kids in the finals is a great thing. Now we're getting ready for the state tournament and ready to close this thing out," he added.

Last year when the Warriors hosted the 3A East regional meet, Bankert and Hartley both made the finals but fell in those matches to place second. This time around they left nothing to chance, Hartley pinned Buffalo's Colton Briscoe in the third period and Bankert defeated Jayden Archuleta of Douglas by major decision 9-0.

"Like I said he's starting to get things clicking," said Garcia about Bankert. "He hasn't had the season he wanted to have but at regionals, he was shooting single legs better than anyone.

"Domanic Hartley has a bucket-handle tear in his meniscus, and most kids with that are looking for the back door. Not him, I can't keep him off of it. He wants to be in the mix of things and that's great we have kids that are willing to push themselves all on their own."

All in all the Warriors had 19 placers. Along with Bankert, Isaac and Luke Goncalves, Hartley and Weyrich, placing for Worland were 106-pound Kyle Anderson, seventh; 126-pound Gullian Comstock,

Taking second by one point reiterated the message Garcia has been telling his team all season long, that every wrestler matters. Even the Warriors that didn't make it to state still played an important role in securing the team's second-place finish. By winning just one match they prevented another team from picking up points.

Garcia was also pleased with his team's discipline during the two-day tournament, not one wrestler picked up a point deduction for any of the many violations that can occur during a meet.

"A lot of times those kids that didn't qualify, most of them won one match and that's big. In the sport of wrestling, everybody matters and every point matters. If we would have got a coach misconduct, fleeing the mat, shoelaces not being tapped, or anything out of 25 guys that costs your team points, we take third.

"My hat is off to those kids because as a coach you're always reinforcing those things and in a crucial time like that one point does make the difference. I'm just really proud of our kids and excited for this week, it's a fun time of the year," said Garcia.

Looking at the state seeding, Garcia likes the path that his team has. They have the potential to push for a top-three finish but what he wants from his team is to be relaxed. He wants them to have fun and when it is time to wrestle go take care of business, then from there they'll let the things worked out the way they do.

"We're looking pretty good. We just have to show up and wrestle. Luke lost in the regional finals but I like where he's bracketed. Peyton Woffinden drew a tough seed at regionals but he wrestled back and was a match away from getting into the third and fourth place match. The same boat with Tristen Lungren, I just like where we're sitting overall.

"This is the time in the season to just get it done. It's time to have fun, let it all hang out there and give it your best. We'll let the chips fall where they may. I'm really proud of our kids and all the work they've put into this season. They're prepared and ready to go. It's should be an exciting weekend," said Garcia.

The 3A State meet beings at 9 a.m. Friday at the Casper Events Center and picks up again Saturday at 9 a.m.