Cole brings back first championship for Bobcats since '15 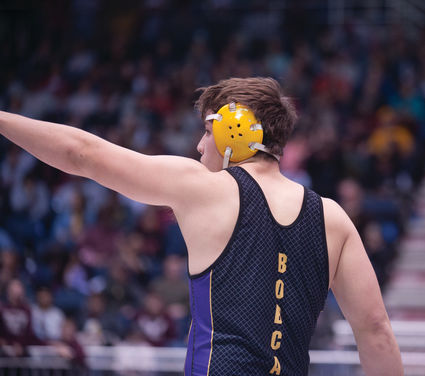 Bobcat Logan Cole points to the Thermopolis fans after claiming the 2A State championship in the 220-pound weight class on Feb. 23 at the Casper Events Center.

THERMOPOLIS - The Hot Springs County Bobcats wrestling team did not come home with a 2A State title but there was still plenty of things for them to be proud. For starters, sophomore Logan Cole took home as the champion in the 220-pound weight class. That earned Cole All-State honors and was joined on that list with teammates Remington Ferree and Wyatt McDermott.

As a team, the Bobcats finished fourth, scoring 146 points. Scoring 185 points, Moorcroft won the 2A State title for the seventh consecutive season, beating out Kemmerer by four points.

"I think we had some good individual performances," said HSCHS wrestling coach Travis McDermott. "We let down on the team side of things, third place was definitely in reach, as well as even higher, but we just didn't perform as well as a team on Friday afternoon and Saturday morning.

Cole is the first 'Cat state champion since Ryan Bradshaw won at 132 in 2015. Going against Wright's Phoenix Buske, Cole had to dig his deepest to bring home his first state title.

Leading most of the match Cole lost his lead in the third period and with 36 seconds left, trailed by two points. With 15 seconds remaining, he got a takedown to tie things up.

In the extra period with sudden death in effect, Cole wasted little time as he scored another takedown to win the match 9-7. As he, McDermott and the Thermopolis faithful were celebrating, the officials met and decided that Buske was out of bounds and therefore Cole was not awarded the takedown.

With the 3A and 4A matches decided all of those in attendance turned their focus to the 2A mat. It felt as if most of the Casper Events Center was rooting for Cole.

Back on the mat, Cole scored what seemed like another takedown but instead, a stalemate was called.

Back at the center of the mat Cole and Buske met again and as the clock slowly ticked, it felt as if this match were going to another period.

But with six seconds left, Cole took down Buske and finally got those pesky two points to stick. Exhausted, he arose a champion and pointed to an enthusiastic Thermopolis fan base.

Afterward, Cole credited all the conditioning his coach put him through as one of the reasons for his victory.

“That was a challenge, I can’t tell you how many times I’ve worked on that outside single [leg takedown] during practice with Remington. Against him [Phoenix Buske], he was so strong and athletic, it was pretty tough,” said Cole. “I knew if I really had to, I could have gone another two more minutes. We have what we call ‘D-Day’ and coach just runs us through conditioning drills and I think that’s where I won the match.”

Added McDermott, “I told him that was the first match that he’s been pushed and he responded in a way that I expected him to respond. He’s got so much talent and I expect a high level from him, and I think I got it out of that match, and I told him that. Even though he made one mistake in there, he fought back and got three takedowns in overtime. That was a credit to his heart, it was well deserved.”

The ‘Cats had two other wrestlers in the finals of their respective weight classes, Wyatt McDermott and Ferree were both a win short from bringing home championships.

Ferree was matched up against Big Piney’s Asencion Pelham, a senior with a 42-2 record.

Pelham pinned Ferree within 23 seconds and while it was a quick match, McDermott was proud of Ferree. Not only was the improvement over the past two months notable with Ferree, but he also decided to go for the home run against Pelham.

There were two strategies when going against Pelham, one Ferree could play it safe and possibly win or he could be aggressive and swing for the fences. Ferree chose the latter and while it backfired, McDermott liked that mentality.

“He’s the real deal and one of the top heavyweights in the state,” said of Big Piney’s Asencion Pelham. “Experience won it out for him against Remington, which means Remington’s growth can be way more than his. Remington’s improvement over the last month has just been phenomenal.

“It may have been a quick one, but it wasn’t due to a lack of effort, he went after the kid. He tried something and I’m glad he tried it because it could have been a six-minute boring match but instead, he went after him. But that kid was experienced enough to take advantage, I’m still proud of him.”

Wyatt McDermott went against Kemmerer’s Colter Julian and lost by a 7-2 decision. The freshman ‘Cat was frustrated but his dad/coach kept things in perspective. And this time next year, if he finds himself in the finals again, things might go in his favor.

“He went in there with some nerves and wasn’t moving as much as he needed to be, because that movement gets people off their game. We had problems getting off the bottom in the third period but he wrestled a junior that’s a great wrestler, coming out of a great room. As a freshman, I couldn’t ask anymore of him.

“His semifinal match was very emotional and he had nothing left after that match. It showed how much he wanted it. He’s got good things coming to him,” said coach McDermott.

Ireland and VanAntwerp closed out their ‘Cat wrestling careers on high notes. Both had hopes of making the finals yet fell just short, but they didn’t let that slip-up ruin their weekend. As they were able to bounce back on the second day and rise up that podium.

“Jeffery VanAntwerp got fifth and really wrestled a great last match. Austin Ireland as well coming back from a disappointing semifinal match, but he came back hard and fought to get that third place,” said McDermott.

It was a great first season for McDermott with the success at state as well as bringing home the program’s first regional title there have been plenty of highlights to choose from. But the one that stands out the most was the unity this team showed all season long.

Watching as the team cheered on fellow teammates or how they pushed one another in the wrestling room, made this season all the more enjoyable for McDermott. The bond the team developed is among the reasons for their success this year.

“The win at Greybull, the second-place finish at Don Runner, they were always thinking about that. Then coming down to state and regionals, all 15 guys on that team contributed and made a difference. We only beat Cokeville by three points at state and that means each point earned was valuable, everyone mattered,” said McDermott.

Losing six seniors and not having a large incoming freshmen class, McDermott is going to ask more from his team next season. That will put more of an emphasis on the offseason training and even though the offseason isn’t a week old yet. He’s already got guys willing and ready to put in the work.

“We’ve already started, Wyatt was back in the room on Monday. There’s junior state in Sheridan, then Logan, Wyatt and Remington are going to Iowa at the end of the month.

Then we’ll go to the Chadron camp in June,” said McDermott.