Goncalves wins title at 160, Warriors place fifth as a team 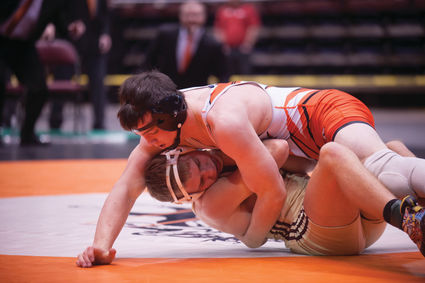 WORLAND - It has been an eventful month for Worland Warrior wrestler Luke Goncalves, the sophomore was not sure he'd be able to wrestle this season due to a leg injury suffered during the football season. But he made it back on the mat at the tail end of January, start of February and four weeks later he's 3A's 160-pound champion.

If winning a state title is the sundae, Goncalves had what felt like a mound of cherries on top to make his victory that much sweeter. First, there was coming back from his football injury. The wrestler he defeated in the state finals by 9-0 major decision was Jacob Pollkowske, the same wrestler who beat him in the finals of the 3A East regional meet the previous week. Then the cherry on top of the other cherries was that last season he was in the state finals as well but finished as the runner up at 145.

"It's really good because I wasn't sure I was going to be able to wrestle this year, so I'm really happy. I was going to be happy with whatever I got left in the season and that just adds to it," said Goncalves.

It was a satisfying conclusion to a trying season for Goncalves. Because while fans see the end results, getting there was the toughest challenge, "Getting into shape for sure, it's hard to get into wrestling shape but I got there," he said when talking about the toughest aspect of this season.

This is the second season in a row that WHS wrestling coach Josh Garcia has had a wrestler cap the season with a state title. Last year heavyweight Morgan Tigner brought home a championship.

As any coach would be, Garcia was proud of his wrestler then adding in all the extra adversity Goncalves went through. He couldn't be happier for his sophomore wrestler.

"Any time you have one of your student-athletes get that severe of an injury, it's almost devastating the initial feeling," said WHS wrestling coach Josh Garcia. "For Luke, it's a huge success story for him and his family. We got him some matches under his belt and he started getting some wins and building that confidence in that leg. He lost to Pullkowske in the regional finals but it was a good learning experience for him. He had a great week of practice leading up to state, he just trained really hard."

Adding to the lore of Goncalves' state title was his championship mindset. Going into the third period with a lead, Goncalves had the chance to keep things conservative during the final two minutes. Instead, he wanted to be aggressive and go at Pullkowske, as he dominated those final minutes.

"Before the finals, we visited and talked about some things we needed to change up and things to look for. We went through a couple different scenarios, like going neutral in the third period. That's exactly what happened, we were up going into the third period and I told him maybe we need to stay on our feet.

"He told me 'No coach, I can get out if I go bottom.' We chose bottom and he got a huge reversal and were able to turn him [Pollkowske] on that reversal. We win the match and it's just a great feeling to have as a coach, and it was great to see him come back from injury to win a state title," said Garcia.

Goncalves wasn't the only wrestler in the 3A State finals, 113- pound Domanic Hartley also made the finals, going against Pinedale's Cody Phelps. After a hard-fought first period, Phelps turned it on during the second and third, as he racked up the points. Eventually, Phelps scored a technical fall victory outscoring Hartley 15-0.

"I think Dom was definitely ready and he wrestled half the match pretty well. We stayed on our feet which was one of our main goals. Going into the second and third period, I have to give it to [Pinedale's] Cody Phelps, he was tough on top. He was tough to get away from and he did a good job of tying our wrists and hands up.

"I'm still super pleased with what Dom's accomplished and I'm sure once he's cleared after his surgery he'll be back on the mat. He's only a junior and I'm excited to have him back next year," said Hartley.

"Both Isaac and Daniel had great state tournaments as well. They ran into some tough kids and beat some tough kids as well," said Garcia. "Adam Bankert also did well, he lost a tough semifinal match."

The other Warrior placer was 138-pounder Tristen Lungren. After not placing at regionals, the senior gave it everything he had in his WHS wrestling finale. Lungren made it to the semifinals and wrestled eventual three-time state champion Reese Karst of Powell.

Karst jumped out to a 7-0 lead after the first period but during the remaining two periods Lungren tested the state champion and nearly came away with an upset victory before falling 9-3.

"Tristen Lungren had an outstanding state tournament. He didn't place in Lander or at regionals but he shows up and lets it all hang out and comes out with a lot of guts. He made the semifinals and had to face the two-time state champ from Powell, Reese Karst. I tell you what Reese Karst didn't want to have anything to do with Tristen Lungren. Unfortunately, we weren't going to get those calls in that semifinal match but my hat is off to Tristen Lungren," said Garcia.

Lungren's effort at state will certainly be talked about for years to come in the Warrior wrestling room.

"It's a great feeling when the two-time state champion is crying and getting yelled at by his coach, you know things are not going to plan for them," said Garcia. "Tristen had an outstanding state tournament and from a coaching standpoint, we're going to be talking about him for years. That should motivate kids that it doesn't matter what happened the week before if you give it your all good things will happen."

While the Warriors finished fifth as a team with 126 points, Garcia was pleased with his team's outing at state. Especially, considering how young his team was.

"We took a young group to state and they did a really nice job. Kyle and Kein Anderson played crucial roles for us. Gullian Comstock got some wins for us. Brody Hernandez lost some close matches one of which was at the last second by one point. Peyton Woffinden, a senior, lost tough matches as well.

"When you take a young team to a state tournament you're looking for some high place finishes for next year. We'll take a little break and then start taking some of these kids to USA tournaments," said Garcia.

That state experience gained by the younger Warrior wrestlers will be valuable for next season. And when you take in that next year's team is going to be led by Goncalves, Hartley and Weyrich, on top of having the back-to-back 3A East coach of the year in Garcia.

Next season's Warrior team could be even better, provided that the offseason is taken full advantage of.

"My outlook for this team us we'll look to grow and get better at technique. We'll also get more matches, this group needs more matches and we'll try to expose them to more wrestling time. Any time you have guys like Domanic Hartley, Daniel Weyrich and a state champion in Luke coming back it really raises that level of intensity in your wrestling room. They set the bar and expectations of not being satisfied and that helps us try to bring home a trophy like we did last season," said Garcia.