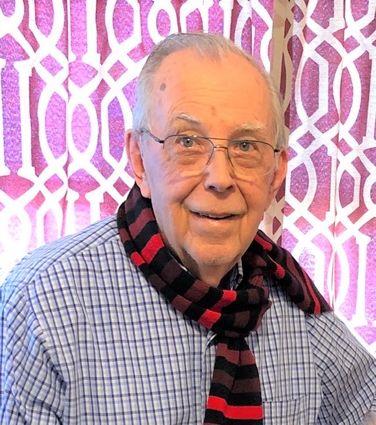 From 1950 to 1952, James proudly served in the Wyoming Army National Guard's 300th Field Artillery Battalion where he saw active combat in the Korean War. Later he worked for the Pure Oil Company of Worland, then as a District Manager for Pepsi Cola Bottling Company of Worland Wyoming for 30 years until his retirement in 1989.

James faithfully cared for his wife, Evelyn Claire (Johnston) Harry 34 years until her death in 1986. He was surprised to find love a 2nd time, marrying Marjorie Ann Schaaf in 1987 and recently celebrated 32 years of marriage.

James was an outdoorsman who loved fishing, hunting, boating, traveling, and appreciating the wonder of God's creation, he passed this legacy onto his children and grandchildren. His faith was expressed by his service in the local church. He loved singing hymns, and his family fondly remembers their meal-time prayers.

Friends and family are welcome to attend the visitation on Friday, March 15 from 4:00 to 7:00 p.m. at Veile Mortuary, 301 S 8th Street, Worland, Wyoming, 82401. A celebration of life will take place, officiated by Randy Harry, on Saturday, March 16 beginning at 10:00 a.m. at Grace Chapel Community Church, 1101 Russell Ave, Worland, Wyoming, 82401. The graveside service with military honors will immediately follow at Riverview Memorial Gardens. In lieu of flowers, memorials may be made to the American Diabetes Association or the Alzheimer's Foundation of America.

Arrangements have been entrusted to Veile Mortuary."