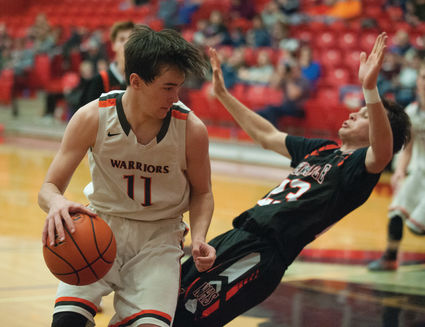 Warrior Bryan Viktorin looks for room around a flopping Newcastle player during the 3A State consolation semifinals at Casper College on March 8.

WORLAND - The Worland Warriors basketball team had championship goals when the 2018-19 season started. Even though the regular season brought plenty of adversity, the Warriors still had an opportunity to make a run at the 3A State title by qualifying for the state tournament and taking third at the 3A West regional tournament.

At state, the Warriors matched up against the Wheatland Bulldogs in the quarterfinals in Casper on March 7. In the first half things went well for Worland as they used a 9-1 run to go into halftime with a 20-12 lead. But the second half was a different story.

Wheatland kept Worland from doing what they do best, transition offense, and slowly chipped at the lead. The Bulldogs took the lead for a moment in the third but a layup by Warrior guard Wyatt Wyman tied that game at 26-all.

Yet, in the final eight minutes of the game, the Warriors were never able to regain their advantage. For most of the fourth, they were within one possession of the Bulldogs but could not break through to retake the lead.

When the final buzzer sounded, the Bulldogs celebrated their 46-38 victory and advancement to the semifinals, and the frustration and disappointment was evident on each of the Warriors faces as they walked off the court at the Casper Events Center.

The loss sent the Warriors to the consolation bracket, taking them out of contention for a state championship. The best they could do now was bring home a consolation championship trophy like they had done last season.

For a team who at one point during the season was the second-ranked team in 3A and with their championship aspirations, playing in the consolation semifinals was going to be the Warriors biggest test of the season. They could mail it in against the Newcastle Dogies on March 8 at Casper College or they could battle and extend their season by one more day.

Going two-and-out at state is not what the Warriors, as a team and program, want to be about.

The scoreboard showed possibly a tight contest between the Warriors and Dogies, as Worland went on to win 66-57; but Worland held the lead from wire-to-wire and at one point had a 22-point lead.

"What we've done all season was, after every loss we wanted to bounce back. The thing coach Abel emphasized with us was to write our own conclusion," said senior Porter Harman. "We didn't want to go home on Friday, so we fought to play on Saturday. Then Saturday we wanted to take home some hardware, we played our butts off to do that. It's not the trophy we wanted but it's still something we can bring home. It was a good way to finish."

Added senior Andrew Edholm, "We've gone through a lot this season but after that tough loss to Wheatland, we all did not want to be done on Friday. We wanted to go out with something special and that's what drove us all."

The win over Newcastle put Worland in the consolation championship against the Pinedale Wranglers, a team they have beaten by an average of 24 points in the previous three matchups. The Warriors kept their dominant streak over the Wranglers rolling as they cruised to 57-33 victory. The Warriors held Pinedale to four points in the second quarter.

Obviously, no team enters the state tournament looking at the consolation championship and says, "That's ours." What a consolation championship shows is what team was able to push past the disappointment of not winning a state title, along with that motivation, and instead, use program pride as their guiding incentive to close out the season with a W.

"I told the guys in the locker room that I will always really enjoy the memories of coaching this team," said WHS boys basketball coach Aaron Abel. "They worked hard and had a resiliency about them, whether that was the next play or the next game. Our guys never allowed it to affect them.

"Our reward is that the guys can come back in 10 years, look at the trophy case and see the line of trophies for Worland basketball. That's going to be pretty cool. It might be a shallow victory right now but in the future, they'll be rewards for what they did on Friday and Saturday at state."

The win in the consolation championship gave Worland their 14th win of the season and put them over .500 for the season at 14-13.

One of the things Abel plans on taking a look over the offseason is going against teams that play a different brand of basketball. Team's like Wheatland, who did not have the athletes to matchup with Worland, often slowed the pace of play; preventing Worland from consistently getting into their transition offense.

"We've got to be better next year of playing teams that are a contrast to us. I've got to do a better job of finding a way, defensively, of taking them out of their comfort zone. Until we get a shot clock, we're going to have to handle teams in that situation. That's what I would do to us if I were playing us as well.

"My focus for the next couple of months while these guys are playing in their spring sport is to figure out a way that we can impose our will on teams that are a contrast to our style," said Abel.

The Warriors do lose five seniors with Tommy Eckert, All-Conference forward Andrew Edholm, Porter Harman, Rylan Mocko and Bryan Viktorin all graduating in May. Edholm and Mocko were starters while Harman, Viktorin and Eckert came off the bench.

There will be a lot of minutes up for grab next season and the Warriors do return All-State selections Rudy Sanford and Luke Mortimer, the team's leading scorers, respectively. Guards Wyatt Wyman and Devon Mercado are also back for next season. Wyman was a starter and Mercado a key 3-and-D player coming off the bench. Other varsity players returning are Mack Page, Danny Ramon and Regan Schmeltzer.

"Every year is different and every season is different," said Abel when talking about next season's roster. "People will be excited because of the players we have returning. At the same time, as I said, every team is different. There's a year of growth hopefully in the weight room, there's growth as a basketball player and growth as a person. Every team is drastically different and it's all about making the most of that team while you have it.

"Every team is like leaves in the fall. This season's leaf has browned and fallen from the tree. We're going to rake them up and clean out the locker room then this summer the tree will start to green again and we'll start to think about next season from a personnel and scheme standpoint."

Ending their Warrior basketball careers with a win was important to the Warrior seniors. Both Viktorin and Mocko spoke about wanting one last win while sharing the court with their teammates for the final time.

"Being able to play with these guys one last time and to play our game has definitely made it worthwhile. Going through all the adversity that we did was hard but we were able to finish strong, even though it wasn't the finish we wanted," said Viktorin

"This whole season has been a roller coaster with ups and downs," said Mocko. "After that game against Wheatland, it was more adversity for us to face, like we have been all year. Ending with a win was important but not just for us seniors, we just wanted the younger guys to have something to build on as well. It feels good to end it this way."

After the final game of the season, Abel spoke about what he's going to remember best about this senior class and what they brought to the table this season.

"Sacrifice is the word that I will best remember this senior group by. It's a very difficult thing when you're a senior when you've busted your butt for four years and the guys in the classes underneath you get more recognition than you get. That can be a difficult thing and our guys understood what they had to do for the greater good. They worked hard all year and every single kid out of those 12 kids that we dressed and brought, I told them hard work is the price of admission.

"You have to come ready to work and not only accept your role but embrace and be a start in it. All five of those seniors were a star in their role for us all season long," said Abel. "That's what I'm going to remember the most about this senior group, their willingness to work their tails off, sacrifice and make the team what it could be."

Continued Abel about his seniors as well as how tough the 3A field was this season, "This year in 3A, there were 11 or 12 teams that could have been playing in the championship game. Powell is a .500 basketball team and they played for the championship. There was a lot of competitive basketball this year and any number of teams that could have finished on top. For our guys to finish as strong as we did, it shows that level of work and sacrifices to get there."

The Worland seniors also spoke about what being a Warrior meant to them during their time in the program.

"It has been amazing. Coach Abel has probably been the best coach I've had. He cares so much about the kids and sport and gives it his all. To have a coach like that for four years is pretty special."

"Especially in basketball, it means so much. Our coach says it best, our basketball program is only for a select few guys. We train mentally and physically, we train hard and build a bond that's incomparable. From our senior to our freshman, we're together. Having those memories and being together just like a family, is something I'm going to surely miss. It has been a fun ride."

"It really taught me about integrity, hard work and definitely ethics. Coach Abel doesn't take anything for granted and make you work for what you got. I've definitely appreciated that and it's fun being a part of a second family."

"It has meant a lot. Working all through the summer and working hard every season, and to make it to state all three years I played on varsity was really great."

"We've always created a culture of hard work. We've always wanted to be the hardest working team. We always give our best effort in practice and we always know how to work together as a team and because of the culture we've built."