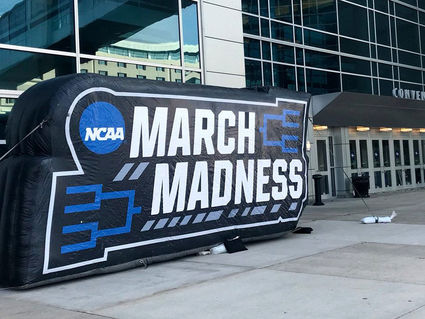 March Madness is officially underway. I know technically it starts with those "First Four" games but watching a collection of teams that don't belong in the tournament or are No. 16-seeds, isn't why I watch the most entertaining postseason in all of sports.

From now until Sunday, is one of the best days on the sports calendar. Brackets will be made or busted over these next four days and you'll either be that much closer to winning your office pool and ultimate sports knowledge bragging rights (far more important than any monetary value), or your bracket will be in flames and the people who only watch basketball by accident, and based their picks on who has the best mascot, are atop the leaderboard.

But I have a foolproof plan to help you take down your office pool. It's very simple and I can't believe it has taken this long for me to figure out.

From here on out, while you're reading through my picks it is absolutely crucial that you go the opposite direction of my picks. This will guarantee you least a share of the money in your office pool.

So you're welcome and let's get to some picks.

Big name team that disappoints the most: Michigan State

I haven't watched as much college basketball this season (My advice from above is already paying off) but one thing has been obvious to me. Duke is good at basketball and probably better at it than anyone else in the nation.

What's crazier is how well liked this Duke team is. Normally, they have one dude, often white, that you wish gets dunked on or put on skates on every possession. This year, though, the whole team is very likable and I believe it all has to do with super talent Zion Williamson. Even if Williamson doesn't have a great NBA career he needs to go into the Hall of Fame because for one season he made a nation love Duke. Maybe after his NBA career is done, a position will be created where he can be the ambassador to the entire Middle East region.

There are a few teams that could take down Duke, like Virginia Tech, and I know some are looking forward to them going against MSU in the Elite Eight. But Yale is going to spoil that by knocking off the Spartans in the Sweet 16.

Mid-major team that will mess up a region: Buffalo

Gonzaga has a nice path to the Elite Eight. There is hype around the Florida State team but I feel like this is the fourth consecutive year in which we've been told to watch out for this Seminole team, only to watch them lose in the first round.

Everyone likes to dump on Gonzaga because their conference is terrible, but I don't see what they could do to improve that. They could jump to the PAC-12 but that's just a lateral move. There is the Mountain West but that conference doesn't have enough pull. So they're just kind of stuck for now. The 'Zags are the only team to beat an at full-strength Duke and that has to count for something.

Nevada's been up and down this season but they have the talent to go on another run. Of the teams in the region, I think they have the best shot at beating Gonzaga. Especially, if the twins get going.

Power Five team that will get embarrassed the most: Kansas State

Most annoying team to watch: Wisconsin

In terms of pace, this region is easily the slowest of all the regions. It feels like every slow, grind it down team is in the South. I predict that most of the bad games during this tournament will come out of the South.

The Wisconsin buzz cuts will be the most annoying team to watch this entire tournament. They'll keep the score in the low 40s to 50s, will have the majority of the tourney's questionable charges and advance to the next round. Then with each win, the great white hype crowd will get more and more excited. There will be mentions of "this is how basketball should be played" and it will come from the same people who freak out every time an NBA player takes a charge. All the while every time a Badger takes a charge it's like Barry Pepper got them from that church tower in "Saving Private Ryan."

I am pleading with Oregon to end this before it even starts.

Team that could knock off UNC before Kansas: Utah State

Of all the No. 1-seeds, UNC got the toughest draw and making it out of this region seems unlikely. Utah State could beat or at the very least give them a tough battle. Then in the Sweet 16 is Kansas, and as a Jayhawk fan, this might be the most confident I've ever been in a tournament, which is weird because this is the worst team we've had in the Bill Self era.

It is well-known UNC coach Roy Williams is an emotional guy and every time he goes against the school he used to coach he turns in one of his worst performances. UNC fans need to be rooting for Self's and KU's mid-major demons to creep up again so they can avoid this matchup. Otherwise, it will be a week of hype surrounding the two bluebloods and the history Williams has with KU, which will eat at him every hour until game time.

Normally, this kind of pick I'd have part of my sports soul slip away but again, this Duke team is too much fun. I have no shame with this pick.