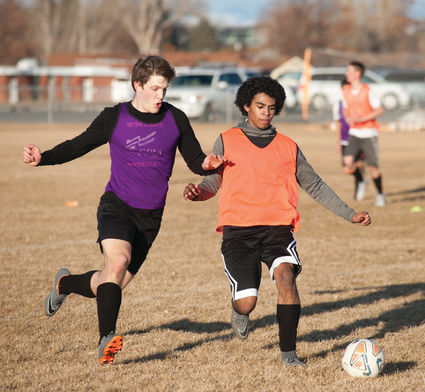 Warriors Andrew Edholm (left) and Devon Mercado (right) chase down a loose ball during a scrimmage at practice on March 18 at Worland High School.

WORLAND - Gone are the days of sneaking up on teams, now the Worland High School boys soccer team will have the target on their backs.

The 2019 season will be new territory for the Warriors. They enter the season as the defending 3A State champions and are No. 1-ranked team in 3A, according to WyoPreps media and coaches poll.

The Warriors start the season with 36 players on the roster which should make practices all the more competitive.

"The first two weeks have been great. The boys have had great attitudes, given great effort and competing hard," said WHS boys soccer coach Ron Overcast. "We've talked with the boys a lot about not living in the past and at the same time not living in the future. It's not a whole lot different than the approach we had last year. It's about living in the present moment and showing up to practice with purpose and intention. Everything we do, we have to try and win that day and get a little bit better. We're going to be everyone's Super Bowl this year, there's no point in denying it and you might as well embrace it.

In what should be a help to their title defense, the Warriors return nearly every starter from last season's title run. That includes four All-State players in Matt Gesch, Konnor Macy, Rylan Mocko and Wyatt Wyman, and All-Conference selections JT Klinghagen and Devon Mercado.

Having so many talented players back for another championship run, Overcast wants to use this weekend's opening and home tournament, the Pinnacle Bank Challengers Cup being held at WHS, WMS and the Worland Community Center Complex, to tinker with is lineup and rotation. With so many versatile players on his team, he wants to see how just versatile they can be.

"At the tournament this weekend we're going to experiment with moving some guys around. We have guys that are very versatile and we're going to see how things look by putting them in different spots on the field. We haven't been outside yet and so we're probably a little bit behind on our transitioning. But it goes back to improving every day, even if it's just one percent. The guys have embraced that mindset and show up to work each practice.

"There's a lot of competition going on, on the team, and they're looking forward to competing against someone else," said Overcast. "We have some depth, we think. We'll find out more when we can get outside and shoot at some goals. It's going to be a fun week."

Another new wrinkle to the season for the Warriors to deal with is the 3A realignment. The Star Valley Braves, who the Warriors beat in the 3A State championship match last season, were moved up to 4A to give that classification an even 14 teams. The loss of the Braves leaves 3A with 11 teams, but once the Lyman and Mountain View programs are able to join the varsity level in 2021, they will fold into the 3A class.

Until 2021, 3A soccer is unbalanced with five teams in the 3A East and six in the 3A West. The unbalanced conferences have also brought a change to the postseason. In years past, the top teams from each division were guaranteed a spot at the state tournament, while the remaining teams battled in loser-out play-in matches to determine the remaining state tournament field. That's all done and gone.

"It's totally different. Instead of a quadrant where you're worried about two teams and then that play-in game if you don't take first. Now you have the conference to worry about and 10 games that are going to be very important," said Overcast.

Going forward, at least until 2021, there will be no state-qualifier matches and no divisions. Instead, at the conclusion of the regular season, only the top four teams from each conference qualify for state.

Making up the West you have No. 1-ranked Worland, Cody, Lander, Pinedale, Powell and Riverton. Over on 3A East, there is No. 2-ranked Rawlins, Buffalo, Douglas, Newcastle and Torrington.

Naturally, this change is going to make the regular season that more intense as every match matters. And just from the eye test, the 3A West is far stronger than the 3A East. Meaning at least one good team out of the West is going to be on the outside looking in.

Getting through and, hopefully, taking the West is going to take a match-by-match process for the Warriors. Thankfully they'll be able to rely on an experienced group of players to navigate their journey to state in Jackson on May 16-18.

"Our experience helps, we are returning 18 players from last year. Our speed is still very good and our technical ability has got a lot better. These guys are resilient and they're competitors. That's the biggest thing we have going for us, they show up to play and that's always nice to have as a coach," said Overcast.