APRIL 1: Out of the diamond and back on the gridiron 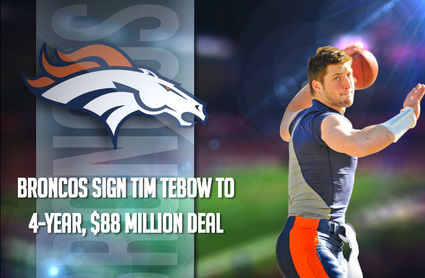 ENGLEWOOD, Colo. (APP) — Goodbye SEC Network. Goodbye New York Mets. Tim Tebow is back on the football field after finalizing a deal with the Denver Broncos, returning to the team that drafted him in the first round of 2011 NFL draft.

“It’s a blessing, truly a blessing and all praise goes to God,” said a choked-up Tebow during his introductory press conference at the Broncos facilities Monday afternoon

Tebow opened up about his time away from football and the NFL and just how bleak his football future looked before the Broncos reached out.

“I thought my football career was finished but when Colin [Kaepernick] was being blackballed by the NFL I had a sliver of hope I’d get a call from someone. I prayed every day and when Washington signed Josh Johnson last season, I knew God was going to answer my prayers,” said Tebow. “Adding to all the blessings is I get to start my comeback in the same place where my NFL career began.”

Some might see bringing back Tebow as another intriguing, to put it politely, QB move by Broncos GM and president of football operations John Elway. Earlier in the offseason, he traded for former Ravens QB Joe Flacco and rather than waiting for Baltimore to cut their one-time Super Bowl MVP. Elway, bidding against himself, offered a fourth-round pick to the Ravens for Flacco.

The Flacco deal was a head scratcher around the league but signing Tebow has some around the league concerned for Elway. “I’ve been tempted to call for a welfare check because he’s my friend but at the same time. If the Broncos are terrible that’s better for us” said one AFC NFL executive who wished to remain anonymous.

What has those around the league worried is that Elway signed Tebow to a 4-year $88 million contract, with $81 million guaranteed.

Elway knows there is a lot of chatter about his QB signings lately but he’s paying no mind to it.

“We needed a quarterback, so I went and got Joe. We needed a backup, so I got Tim,” said Elway. “In this league, you have to zig while everyone else is zagging. I understand paying that much money to Tim might seem out of place, especially when we had Joe take a pay cut. But my thinking is this, Joe is just entering his prime and he’s 34. Tim is 31 and is close to his prime. So when Joe is out of his prime in a few days, I mean years. We can turn to Tim, who we’ve been grooming during that time to be the second greatest Bronco quarterback of All-Time.”

Originally, it was Elway who dealt Tebow to the New York Jets during the 2012 offseason. When asked what led to his change of heart seven years later. Elway stared blankly at the pool of reporters before screaming “Gattaca!” and running maniacally out of the press conference.

After guiding the Broncos to a surprise playoff appearance and wildcard victory over the Pittsburgh Steelers and being traded to the Jets, Tebow spent his lone season in New York on the bench. The following offseason the dysfunctional Jets moved on from the former Heisman winner by releasing him.

From there, Tebow signed with the New England Patriots in 2013 and the Philadelphia Eagles in 2015 but was unable to make the regular season roster for either team.

Tebow fans tried to claim the NFL was blackballing Tebow but it failed to stick because those outside the Cult of Tebow pointed to his career 47.3 completion percentage.

During his time away from the NFL, Tebow worked as an analyst for the SEC Network, which is owned by ESPN, in the fall, and in the spring and summer was a New York Mets prospect.

Before signing with the Broncos on Monday, Tebow was expected to join the Mets Class AAA affiliate the Syracuse Mets. For the New York Mets, Tebow’s departure is a hit to the team’s plans for the 2019 season.

The Mets were hoping that after being mathematically eliminated from postseason contention in early August. Tebow could help boost Stadium attendance during the season’s final two months. “We wish Tim the best and are appreciative of the hard work he’s put in the past couple seasons in our minor league system,” said Mets GM Brodie Van Wagenen. “For us, it hurts because we had planned to bring up our younger guys around August. We were going to include Tim in that group with the idea he'd remind everyone there's a second MLB team in New York.”

Fox News plans on covering Tebow’s return with much fervor, but when asked if the network’s biggest personalities like Tucker Carlson, Sean Hannity and Laura Ingraham would have a hard time differentiating from Tebow kneeling in prayer to those players kneeling in protest, the network refused to comment.