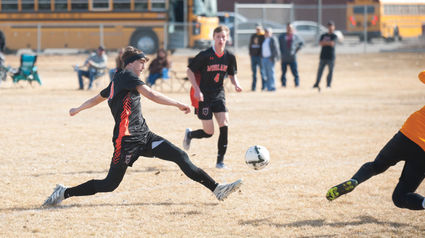 WORLAND — Starting the season strong was the goal and that’s exactly what the Worland Warriors boys soccer team did last weekend.

Hosting the Pinnacle Bank Challenger’s Cup on March 22-23, the Warriors battled through four matches to take the cup. In the first round, Worland beat Newcastle 10-2, in the quarterfinals Lander 3-0, Powell 2-1 in the semifinals and Buffalo 4-0 in the championship match.

It was a dominating performance by the Warriors who, in total, outscored their opponents 19-3 for the tournament, also winning their first Cup since WHS boys soccer coach Ron Overcast has been at the helm.

Not only did Worland show they’re still the team to beat last weekend but they also flexed how deep they are. Other teams rotations are anywhere from 10-13 deep, the Warriors can go 16-17.

“We’ve told the guys from Day 1, we have 16 to 17 players that could start for most teams. Our practices are very competitive and they have to show up every day. For us it’s still about taking it one day at a time, can we be 1-0 on that day. They have to compete and bring their A-game every day and that’s not easy.

“The second half [vs. Buffalo] we had someone who wasn’t doing their defensive assignment and I put someone in who could do it. This year it’s going to be like that and it’s hard because we’re asking them to compete in practice but at the end of the day you have to let it all go and come together as a team,” said Overcast. “It is a good situation to have but it’s still early. We’re still trying to figure out which combos work together and that will be a season-long thing. It’s exciting and it’s going to be fun.”

In a weekend full of impressive numbers, two speak to just how deep this team is. Nineteen of the Warriors’ goals were scored by 10 different players and 13 of those 19 were assisted by eight different players.

Having Mortimer lead the team in goals came as a bit of a surprise since he hasn’t played soccer since the seventh grade and isn’t a starter. But scoring five goals and chipping in two assists speaks to Mortimer’s athleticism and the talented teammates surrounding him.

“It’s a testament to Luke’s athletic abilities and his teammates. He came on to the team and has just fit in. We’ve been getting him the ball in good spots, and soccer is really a team sport. One guy can’t do it by himself.

“That was the cool thing about this weekend we had so many team goals. We’d have a good defensive stop, we’re linking up two or three passes and they’re finishing it. Those are all good things but, again, we’ve got to go back to winning the day,” said Overcast.

Sanford led the Warriors in assists with three, while Luna, Mortimer and Venable had two apiece. Mocko, Weyrich, Kolter Wyman and Wyatt Wyman had one assist each.

For the weekend, Warrior keeper Konnor Macy had 33 saves and allowed only three goals.

Allowing only three goals on the weekend was pretty impressive as well. As strong as the Worland defense looked, there is room for improvement and Overcast believes that will come as his backline settles and begins to gel as a unit.

“Because of the weather we haven’t been out on the field as much. So figuring out our spacing hasn’t happened yet. One thing we’ll work on is possession specific stuff. So the moment they come on to the field they’ll get to work. The midfielders and forwards will finish in front of the goal and defenders work on clearing the ball out of the 18. We spend 15 minutes every day working on those things.

“I expected that we’d struggle with it and we got better [Saturday]. We couldn’t win a ball out of the air, then again we haven’t practiced that yet. Our finishing was good but we still need to clean that up. After this weekend, the defenders see the benefit of winning the ball out of the air. We’re talented enough that as long as we can put the ball back up at the half, we’ll push up and counter-attack. We don’t have to get too fancy inside the 18,” said Overcast.

With the Cup out of the way, the Warriors now turn their focus to the conference play. March 30 they travel to Riverton to face the Wolverines in a 1 p.m. match, and on April 1 they host the Cody Broncs at 5 p.m. at Worland High School.

Conference play has far more emphasis this season than in seasons past. Quadrants and the state qualifying matches are done away with and in order to get to state, a team has to finish in the top four of their respective conference.

Scoring conference points by win or draw is all that matters now for the Warriors.

“This tournament is over and now we have to focus on the week’s practices. Then Saturday we’ve got a conference game against Riverton. Conference is different this year and it’s not about just beating Cody and Powell anymore.

“There are 10 conference games and only the top four go to state. We have no conference wins and haven’t qualified for state. We have to stay focused and not think just because we won this tournament that everyone is going to let us win. All of these teams, Buffalo, Powell and Lander want to beat us so bad. That’s why it’s critical that we get better every day and we’ve got to be out there playing for one another,” said Overcast.

Being the 3A defending champs along with getting out to such an impressive start, teams are going to be gunning for the Warriors. They’ll likely see a team’s best effort during every match. Having that pressure can be tough and that’s why Overcast wants his team to develop a championship mindset and more importantly, have fun playing soccer.

“We can’t forget about having fun too. I think last year as the hype around the team started growing it started getting to them. We began playing tight. We’ve talked about that too and we’re going to have to block that out again. [The WyoPreps rankings] come out this week and we know who is going to be the No. 1 team. We have to embrace that and practice like we’re champions. I told them at halftime [vs. Buffalo] we have to start developing the championship mindset,” said Overcast.