WHS track has their best week yet at Powell Invite 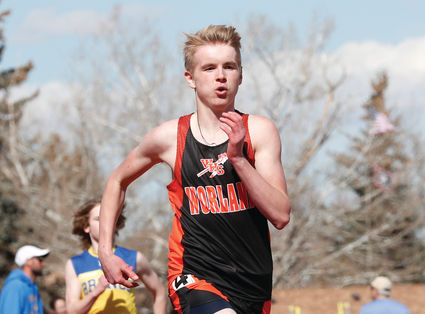 Warrior Chris Nicholas sprints ahead during a meet in Cody on March 23.

WORLAND - Having nearly a full team and great weather at the L.A. Kohnke Invitational at Powell High School on April 6 proved to be a big boost for the Worland High School track and field teams. Both the Warriors and Lady Warriors turned in their best performances of the season, to date.

"It was awesome and I'm proud of the kids," said WHS track and field coach Tracey Wiley. "The kids keep getting better and better with the all the conditioning and repeats we're doing. We have a really young team and it takes time to build that confidence. But the freshmen have figured out they can compete against some of these seniors and juniors at these meets"

The Warriors 4x100-meter team of Garrett Cole, Tommy Eckert, Chris Nicholas and Victor Olvera qualified for the 3A State meet in Casper on May 16-18. The team ran a 45.45 to finish first at Powell.

Also qualifying for state was sophomore high jumper Cole Harman. In Buffalo the previous week, Harman just missed out on punching his ticket to state. After a week of hard training, he cleared the 6-foot qualifying mark and placed third at Powell.

"Last week in Buffalo he cleared 5-foot-10 easily, by four or five inches. Once it gets to six foot it becomes a mental game but he got it [at Powell] and it was awesome. Then they moved it up to 6-foot-2 and his form got out of shape but that's OK. In Buffalo he had a PR [personal record] and in Powell he AQed, he's definitely making progress," said Wiley.

Senior sprinter Nicholas is the next Warrior who is on the verge of qualifying for state in the 200-meter dash. And Wiley is confident he'll hit that 23.4 mark sooner, rather than later. "He's close in the 200 and I just know he's going to get it," she said.

Sitting out the last handful of meets due to injury was Willey's son, sophomore Marcus Wiley. Marcus Wiley hit the track like he had been there all season, as he finished fourth in the 400-meter dash with a time of 56.66.

"He's been out with a hip injury and hasn't been able to run for three weeks. He got fourth in the 400 and we look for good things from him, now that he's healthy," said coach Wiley.

The Lady Warriors throwers had their best meet yet, freshman Maren Cottrell threw an 87-7 in the discus to finish seventh. Payton Julson did not place in Powell but did throw a 72-6 in the discus, which set a new personal record for the freshman by 11 feet.

"Talking with Ed [Wise, WHS throwing coach] he's got a lot of young throwers. We didn't have Alexa [Caballero] because she's on the senior trip to D.C. but we had the young throwers step up in Powell. Payton Julson had an 11-foot PR in the discus, she's only a freshman so we're looking for good things to come from her," said Wiley. "Maren Cottrell, another freshman, made the top eight in the discus."

Junior Julie Seidel had another strong meet finishing seventh in the triple jump by jumping a 28-6. Seidel is one of the Lady Warriors better sprinters and jumpers, and in order to maximize her jumps, Wiley plans on changing up her events.

"We're just trying to get her back up to where she can jump in the long and triple because she's always going back and forth between the four of them," said Wiley.

The Lady Warriors distance and mid-distance runners also had strong showings. Kait Wassum took first in the 800-meter run at 2:34.64 and right behind her was senior Hailee Hunter, crossing the finish line with a time of 2:37.91.

Hunter and Wassum weren't the only top-eight Worland runners in the 800 meters as Odalys Osorio came in sixth with a time of 3:10.28.

Wassum, who is nursing a hamstring injury, also ran the 4x400-meter relay team and helped the team finish second.

"[Wassum] talked her dad into running the 800. Kait can do it all and can go to state in any of those. She went out and took first, and I was worried about her with that injury. Then Hailee Hunter was right behind her and Odalys Osorio finished sixth, it was a good group.

"We had an opening on the 4x400 and Kait offered to run, she called her dad and said that would be good. Then she went out and ran a good leg of the 4x400," said Wiley.

Coming off such a successful week should be a big motivator for both Worland teams as they look to build off the Powell meet.

Wiley is also looking to add depth to some of her thinner events by asking some of her athletes try out those events, like the 300-meter hurdles and 800-meter race.

"We're talking to some of our 100-meter hurdle girls into running the 300 hurdles as well. We're trying to convince them into running in the 300 because it's an event they'll do well in at regionals and state.

"We also don't have as many 800 runners, so it's the same thing there. Keith Borrelli is one of them, he's a kid that gives it his all day in and day out," said Wiley. "He told me he's going to run the 800 because he wants to compete and got to regionals.

Worland has two meets on schedule this week, their annual home meet, the D&D Invitational, on Thursday at 1:30 p.m. and the Riverton Invitational on Saturday.

The weather this week could spoil one or both meets or just make them a tad miserable. Either way, the Worland athletes will prepare and improve any way they can.

"Whatever the weather is, we don't back down and we'll run and condition where ever we need to," said Wiley.

On April 18 Worland High School will host the Warrior Triangular at 4 p.m. with Ten Sleep and Thermopolis taking part in the meet. The triangular will also be a joint high school and middle school meet and volunteers for the meet's events are needed. If interested get a hold of Teresa Warner at Worland Middle School for more information.

The point scorers from the L.A. Kohnke Invitational are as follows.