Worland track gearing up for final push of the regular season 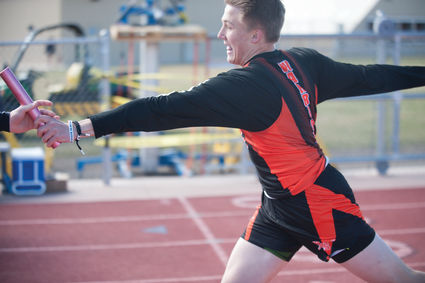 Warrior Tommy Eckert stretches to give the baton to teammate Marcus Wiley during the sprint medley relay at the D&D Invitational at Worland High School on April 11.

WORLAND - It is hard to believe but the track and field season is nearly complete and for the Worland High School team they have three meets remaining before the start of the postseason.

Hosting their annual home meet, the D&D Invitational, last week at WHS, the Warriors and Lady Warriors showed they are taking advantage of every meet. Plenty of Worland's athletes set new personal records or inched ever so close to qualifying for the 3A State meet.

After the home meet Worland had planned on traveling to the Riverton Invitational on April 13 but after seeing how well the team did during the D&D, and with the weather being so cold, and wanting to heal up some injuries, WHS track and field coach Tracey Wiley decided to give her team the weekend off.

"They had a good home meet and we've had some sore shins, quads and hamstrings, and with that cold wind on [last] Thursday. We decided to let them have the weekend off because we're getting too close to regionals to have major injuries. The kids were glad and we hit hard on Monday and we're looking to have a good home meet [today]," said Wiley.

The Lady Warriors finished second as a team at the D&D scoring 93 points. Among the highlights on the day for the Lady Warriors were junior Kait Wassum and freshman Ashanti Pedraza. Wassum won the 400-meter dash, running a 1:05.83 and behind her was Pedraza, finishing second with a time of 1:09.23.

"Kait won the 400 and Ashanti was right behind her. It has been a long time since we've had girls that want to run the 400 and it's fun to see Kait and Ashanti take first and second," said Wiley.

For the Warriors, sophomore Kolby Tigner threw a 108-03 and came in fourth in the discus.

"Payton Julson PR'd again and took fourth, Makenzie DuPree PR'd and got fifth, Kylie Fronk took sixth, then Maren Cottrell had a good meet and got seventh. Three of those four are freshmen and they all just keep getting better. We're looking for good things from each of them as the season keeps going.

"Payton Elliott, another freshman, got fifth in the shot and she's been getting stronger. Makenzie DuPree also placed in the shot. Then for the boys, Kolby Tigner got fourth. He's another sophomore, and it just shows we have a good future in those throwers," said Wiley.

Warrior sprinter Chris Nicholas is very close to qualifying in both the 100-meter and 200-meter dashes. The senior was among those that used the weekend off to heal up and with that extra rest, Wiley is hoping that will be what helps him get those qualifying times.

Originally, Worland had this week as an open week but the opportunity came up to have this Triangular they jumped on it.

"We didn't have this one scheduled at first but when Teresa Warner, the Worland Middle School AD, asked if we wanted to join the Triangular with Thermop and Ten Sleep. We jumped at the chance.

"We've got three weeks until regionals," said Wiley. "We've been filling out our other events like the 800. We also get our D.C. Trip seniors back and it'll be a good meet today."

Wiley was very appreciative of all the volunteers at the D&D Invitational who helped put the meet on, "We want to thank everyone, administrators, teachers, students and community members that helped with our home track meet," she said.

If there are volunteers interested in helping for today's Triangular, contact or make your way to the Warrior stadium to find Wiley, Warner or WHS AD Mark Mortimer to help out.

Correction: In the April 11 edition of the Northern Wyoming News Jonathan Nicholas was misidentified in the photo on B1.