Bobcats and Lady Bobcats rack up the PRs at Warrior Triangular 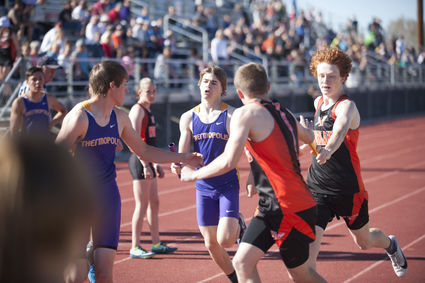 Bobcat Wyatt McDermott hands the baton to teammate Kolby George as they are neck and neck with Worland's Marcus Wiley and Porter Harman during the sprint medley relay at the Warrior Triangular on April 18 at Worland High School.

THERMOPOLIS - The Warrior Triangular at Worland High School on April 18 turned out to be a terrific meet for the Hot Springs County High School track and field team. Not only did 26 of the 30-plus athletes set new personal records, they also picked up their first state qualifiers of the season.

Lady Bobcat Olivia Weyer qualified for the 3A State meet in the pole vault, clearing 9-03 and finishing first at the Triangular. Then the Bobcats sprint medley relay team (Blake Williams, Jesse Skelton, Wyatt McDermott, Kolby George), who broke the school record just a few weeks back, set a new school record mark and qualified for state in a tightly contested race with Worland.

The Warriors came out on top in the sprint medley with a time of 3:47.15 but the 'Cats were not far behind as the final leg, George, crossed the finish line at 3:49.52.

"We had lots of personal records again and had some prequalifications. We had 26 kids set new PRs, Olivia Weyer prequalified in the pole vault and the boys sprint medley also prequalified. It was all good, the weather was nice and the middle schoolers got to watch some high school level competition, it was a good day," said HSCHS track and field coach Aimee Kay.

Other standouts from the Triangular, which was also a joint meet with Ten Sleep, Thermopolis and Worland middle schools, were Skelton, Mariah Brooks and Ashley McPhie.

"Mariah Brooks had a good day, she set a new PR with her 100. Jesse Skelton continues to set PRs with his 100 and 200, he didn't run the 200 but he's whittling his way down in the 100. My high jumpers had a good day, Ashley McPhie and Mariah [Brooks]," said Kay. "We just want to keep improving and not stall out. They've been working hard and have had good attitudes, which is nice."

With two meets this week, the Buffalo Twilight today at Buffalo High School and the Meeteetse Invitational on Friday, April 26, Kay is going to give some of her athletes a lighter workload in the hopes that it leads to more PRs.

Kay implemented this strategy during the Triangular and seeing a bump in PRs, thought to try it out again with two meets on schedule.

"[Two meets] gives the kids an opportunity just to do one to two events and really focus on those events. With the PRs we saw last week, a couple of the kids saw the difference in their events," said Kay. "I didn't quite give all of them the chance to focus on two events, a few still had to run their relays."

Next week is the final week of the regular season and Thermopolis will close it out with their annual Bobcat Invitational on May 3. Kay and her staff have been motivating their athletes as the 3A East regional meet in Burns is not far off. And one of the better motivators is the 'Cat and Lady 'Cat athletes seeing their hard work pay off by setting new PRs.

"We've just been talking about being at their best for regionals and working hard during practice. We're making good memories too, if they enjoy it then they tend to work harder.

"It's sometimes hard to have that balance because it's not an easy sport. You come and you work hard, but seeing the PRs that helps motivate them to do their best and they see that those hard practices pay off," said Kay.

Results from the Warrior Triangular on April 18 are on B3.