No. 1 Warriors move closer to clinching a spot in the state tournament 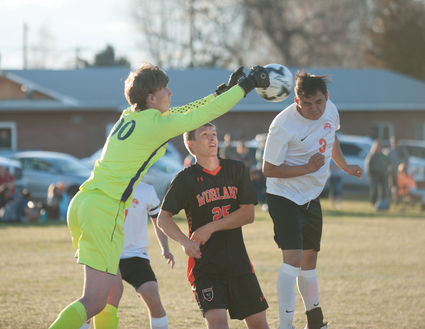 WORLAND - A pair of home wins over 3A West foes, Powell on April 18 and Lander on April 23 has moved the Worland Warriors boy soccer team that much closer to clinching a spot in the 3A State soccer tournament in Jackson on May 16-18.

The No. 1-ranked Warriors beat the No. 2-ranked Powell Panthers 3-0 and the Tigers 2-0, pushing their 3A West conference record to a perfect 6-0. Adding to the impressive clean sheet victories was that Worland had to turn to a different lineup for those matches due to injuries.

"I coach every game differently and it's kind of by gut-feeling. It's always tricky with the subs but the depth thing is really nice. We put Luke Lamb at the outside back and moved Jaime Luna up to the wing and the guys are so versatile we can keep things moving.

"These guys are so versatile, I can move them up front on the attack or back on defense. It's a nice thing to have and we'll get a couple of the guys back in the next week and maybe things will stabilize a bit but it has been nice," said WHS boys soccer coach Ron Overcast. "I'm not even sure how many different starting lineups I've used this season but the versatility is a credit to the kids. They all come to practice, they work hard and they learn."

Against Powell, the Warriors got their three goals by way of sophomore Rudy Sanford and juniors Devon Mercado and Wyatt Wyman. As the outcome of the match became apparent, the Panthers, out of frustration, played a tad more physical. But the Warriors remained level-headed and were sure to not get baited into picking up any yellow or red cards

"We talk about that a lot and during a game when things start to get chippy that's when you'll hear me say to the boys 'stay in the moment, be present.' We've talked about being in the moment and controlling what you can control. We can't control how the other teams are going to act but we can control how we're going to react.

"The way we handle those things is we're going to score on you rather than getting caught up in retaliation and picking up cards," said Overcast. "I thought the guys handled it well [vs. Powell], there was a point in that game where I don't know if Powell was getting frustrated or what. But it got chippy out there on the field."

Against Lander, first-half goals by Sanford and senior Rylan Mocko gave Worland the early lead and even though Worland wasn't able to increase their lead they still had plenty of quality shots on goal, they just didn't find the back of the net.

"We had some nice struck balls but that's soccer and it's not unusual to see the score at 1-0 or 2-0. We got some good shots and sometimes they go in and other times they're barely wide. What I was pleased with was how well we struck the ball, Jaime [Luna] had one shot that took off but ended up being a great save by the keeper," said Overcast.

Only the top four teams from the 3A West and 3A East will move on to the state tournament. To officially clinch a postseason berth, Worland can do it by beating Riverton at Riverton High School on April 29 or having Pinedale lose to Lander on the same day.

With their spot in the postseason secure, Worland can turn their focus to locking up the No. 1-seed out of the West. As of publishing, the Warriors hold a six-point advantage over the second-place Cody Broncs.

Before going through any clinching scenarios, the Warriors will need to get by Buffalo first. Worland hosts the Bison on Friday the April 26 at 6 p.m. Worland will likely be at full-strength again on Friday and since this is a non-conference match, Overcast might use a different lineup or rotation.

"It has been different coaching these conference games. In the past, with the quadrant and just the four games, we could be 2-0 in the quadrant and experiment in the other games. I've haven't felt like we've been able to do that as much.

"We're going to come out and want to compete and beat Buffalo. But we'll also look to give some other guys some chances to get minutes on their legs," said Overcast.