Enzi announces plan to retire at the end of his term 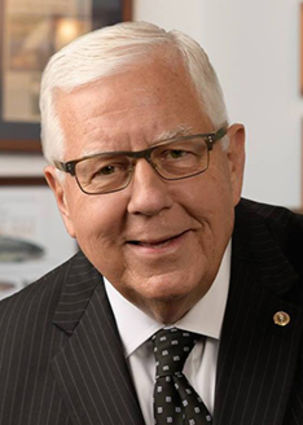 Gillette, Wyo. – U.S. Senator Mike Enzi, R-Wyo., announced today at a news conference in his hometown of Gillette that he does not plan to run for reelection in 2020.

"So far, I have served in the US Senate for more than 22 years," Enzi said. "Diana and I have been in Wyoming most weekends often traveling 500 miles by car each weekend. That means I've worked in Washington 4 days a week and Wyoming 3 days a week which uses up all of the week. When we have a recess which I call a "work period" Diana and I usually travel around Wyoming some 1500 miles by car. We are on planes 8 to 14 hours a week. We live out of a suitcase on both ends. I'm not complaining. I chose the job and have always worked at a job and was taught to do a job so well that I would be proud to put my name on it. In two more years Diana and I will have done that for 24 years for you. That's a longer elected Senate service than anyone in Wyoming history.

"During my life I've followed my Mom's advice, my core values: Do what's right. Do your best. Treat others as they want to be treated. I can't do the kind of job Diana and I have been doing for another six-year term. I was able to see my kids grow up before I went in the Senate. Now I want some grandkid time. I will continue to be the Workhorse for Wyoming that you expect me to be through this term. My deepest thanks and appreciation to the people of Wyoming for the honor and privilege that you have given to represent you in so many different ways.

"I have much to get done in the next year and a half. I want to be able to focus on budget reform to get control of our national debt; Several small business initiatives; Protecting and diversifying Wyoming's Jobs. I don't want to be burdened with the distractions of a campaign. After this term I will find other ways to serve."

Enzi was sworn in as Wyoming's 20th United States Senator on January 7, 1997. Enzi has made a name on Capitol Hill for his unique way of breaking down party lines and working across the aisle. Enzi believes that people can agree on 80 percent of the issues 80 percent of the time and if they leave the other 20 percent out they can get a lot done. By following his "80 percent tool," Enzi has passed more than 100 bills since he came to Washington, which have been signed by both Democrat and Republican presidents.