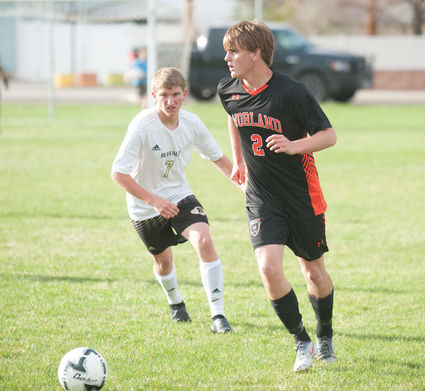 Warrior Rudy Sanford looks for options while on the attack during a match against Buffalo on April 26 at Worland High School.

Since then the Warriors have ripped off 24-straight victories, which included a state title mixed in there. Last week Worland entered one of the more challenging stretches of their 2019 schedule as they had to play three matches in five days. Things kicked off with a home match against No. 5 Buffalo on April 26, followed by road contests against Riverton on April 29 and No. 4 Powell April 30.

That stretch could have snapped the streak, instead, the Warriors increased their winning streak to 24-consecutive matches.

Worland beat Buffalo 5-2 and while the score shows a blowout, the Bison were the first to get on the scoreboard. An early goal put Buffalo up 1-0 but Worland responded by scoring the next four goals. Senior Rylan Mocko scored two of those goals, one of which was a header off a corner kick, and juniors Daniel Weyrich and Rudy Sanford struck in a goal apiece.

"We've really been working on when we lose possession of the ball, how fast can we get it back. We've been working on transitioning to defense because I felt like we've slacked off on it," said WHS boys soccer coach Ron Overcast. "Against Buffalo, right in the first two minutes we turned the ball over in the midfield, they make a pass and we forgot that the wind was blowing 20 mph on the field. Most of the guys thought the shot was going wide left but the wind blew it in."

Continued Overcast, "That was a good learning experience, especially playing in bad conditions, you have to get pressure on the ball. In windy conditions, you can't let them get shots off from 35 yards within the goal. We learned that lesson and it carried over to the Riverton game."

Traveling to Riverton on Monday the Warriors got on the board quickly with an Andrew Edholm goal off a corner kick. That early goal threw the Wolverines off their game plan, when last time they played Worland on March 30, Riverton packed in their defense within the 18 (the penalty box) to slow down the Worland attack.

"We did a much better job of transitioning from the attack to defense then back into the attack. We got that early goal from a corner and that kind of put them [Riverton] on their heels.

"They came out and tried to attack but once we got that early goal it got in their heads and they fell back. We were passing the ball really well and being creative on the attacking end. The guys played really well against Riverton," said Overcast.

The following day Worland went to Powell and in terrible weather conditions were able to leave with a 1-0 win, and pushing their record to 13-0 on the season and 8-0 in the 3A West conference.

As good as the Warriors have been during this streak, corner set pieces have been a struggle for them. But this season the improvement is noticeable in that area of their game and last week they were able to put two goals in off their corner sets.

With the state tournament quickly approaching, better execution on their corners will come in handy, especially during a tightly contested match.

"The past few weeks we've spent more time working on them. I don't think we even scored on a corner last year and we can't have that. We're going to find ourselves in a close game and we need to score off our corners," said Overcast. "We've scored off corners twice now and that's important. We've put in a couple of new plays and guys are running, they're being disciplined and running to where they need to be.

"We saw that discipline against Riverton, Andrew Edholm was right where he needed to be. Rylan [Mocko] went to the near post and was able to flick it back into the middle and Andrew was there, easy goal."

The Warriors win on Monday clinched their spot for the state tournament and with how the current standings sit Worland is guaranteed no worse than a No. 2-seed at state.

Clinching the No. 1-seed out of the West can be done in two ways. One way, the Cody Broncs lose at any point before their May 10 match against Worland, the Warriors take the No. 1-seed.

Or the other way, the Warriors beat the Broncs on May 10 at Cody High School and take the No. 1-seed.

However, clinching scenarios for the No. 1-seed are not at the forefront of the Warriors focus. For them, it is about being in the present mind and taking care of the day's business by improving, whether that be in practice or a match.

"I say this all the time, it's just one day at a time and one game at a time. We know we're going to state and have taken care of that. If we work to improve every day, whether it's a game or practice, then the result part of it will take care of itself. We can't live in the past or in the future, otherwise, it becomes overwhelming at times. We just try to break it down to one day, one practice, one drill and one game at a time.

"Obviously, we want to be conference champs but we have to take care of business in our next game. These guys are competitors and they're going to play hard and as a coach that's all I could ask of them," said Overcast.