WORLAND - Washakie County Homemakers are observing Homemakers Week this week, May 5-11. As part of that observation the group nominates a community member, or one of their own members, as an "unsung hero." 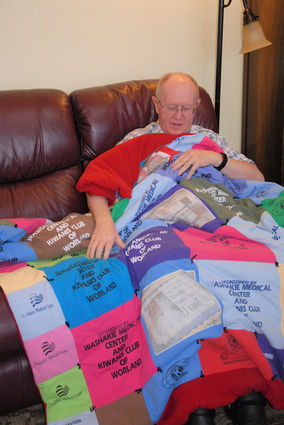 Washakie County Homemakers have named Fran Scranton as the 2019 Unsung Hero. A member of Worland Kiwanis, he holds up a quilt his wife Diana had made for him. The quilt features the different colored T-shirts members wear from year to year. This week also marks Homemakers Week.

WORLAND - Washakie County Homemakers are observing Homemakers Week this week, May 5-11. As part of that observation the group nominates a community member, or one of their own members, as an "unsung hero."

This year the organization has named Fran Scranton as the 2019 Unsung Hero.

For 30 years Scranton has been a volunteer for the Worland community through several different projects. "When we moved to Worland in 1983, my wife Diana and I became involved in Oktoberfest."

Many folk remember this engaging celebration of German heritage through its food and music. One such music entity was the Tyroleans, a group of young people dressed in German clothing, performing dances and entertaining the crowds with their instrumental numbers. The Scrantons eldest daughter Amelinda Scranton Olson was a member of the band.

"I was a member of Kiwanis in my hometown of Powell," said Scranton. "It was only natural for me to join Worland Kiwanis." He said that Keith Noland got Scranton involved right away with the Health Fair.

"Keith was ready to step down as chair and he more or less passed me the baton as its chair," Scranton said. "We were able to expand the fair from a one-day affair of serving 125 people to ultimately 2,000."

The money generated from the blood draws helped to eventually raise over $350,000 returning that money (with the exception of advertisement) to the community. Some of those dollars helped provide young people with much-needed scholarships and other dollars were spent improving the playground equipment at Sanders Park.

With money donated to the hospital, it was able to begin a phlebotomy program, training interested individuals in learning how to draw blood. Scranton recalls Bryony Volin as one of the early students. She went on to become a nurse he said. "We helped give her the seed money to further her career." he said.

Scranton is still the chair for the blood draw.

Diana was a Big Sister to Little Brittany Kocher. Scranton also participated as the second half of that bond. "I think Brittany enjoyed being with Fran more," said Diana Scranton. Big Brothers Big Sisters did various fundraising projects to help provide matches and the Scrantons with the help of their daughter Rani Scranton put together a wine basket. Money raised was matched by Kiwanis International of Denver. "Brian Burky was able to buy equipment for Kiwanis Park," Scranton said. "You can see the outcome with the fencing around the basketball and tennis courts and the covered picnic area on the south side."

Scranton was also named an honorary Girl Scout leader and helped three young girls obtain badges in 1999. "My then office assistant Robin Ogaard was the Girl Scout main leader at the Edith Healy Little House and we worked with her daughter Courtney, Robin Downer and Whitney Neumann," he said.

The three wanted to do a lasting legacy project which involved videotaping three areas in the Big Horn Basin. Courtney did the track site at Shell, Whitney did the rock art and Robin did fossils. That video was then given to the Worland/Ten Sleep Chamber of Commerce.

Scranton has been a camera and history buff for years; and with his involvement at the Washakie Museum and Cultural Center videotaped past productions of Missoula Children's Theatre. "We would sell those videos to the parents," he said, "earning money for the museum. He also did still photography and videotaped past museum performances. Scranton is an integral part of the museum's History Day for fourth graders. He teaches them about rock art. "The only year I missed was 2011," said Scranton.

Each Christmas season Worland Kiwanis hosts Breakfast With Santa. Scranton is the chief pancake batter maker. "I can pour water with the best of them," he said with a laugh.

Both Scranton and his wife were part of the Worland Watchdogs, a motorcycle group. In the year 2002 the group did a poker run that raised funds for first responders.

Scranton retired from insurance sales for a whopping two months. He realized he still enjoyed working and applied for a position with the Washakie County Courthouse as a floater doing various odd jobs.

He has served as past board president for Northwest College. He served on the alumni board in the late 90s. In 2003, Scranton and his daughter Rani were each awarded with the Alumni Award for community service.

Scranton has been named Kiwanian of the Year several times and has served as past president and is a current board member.

"I try to do one thing and do it well," Scranton said. "You might say the blood draw is my favorite project. It's gotten easier to manage with the introduction of computers."

In closing Scranton said, "Show a kindness and that kindness will be given back."

Family has always been a priority for the Scrantons and this month the couple will help celebrate their grandson's Henry Otis Maya 1-year birthday.

Be sure and check out the window display at the Worland Community Center where Homemakers have decorated it using the group's theme "Homemakers are Buzzing."