A small but talented group headed to state for Worland track

Wassum wins 3A West regionals championships in the 100-meter, 200-meter and 400-meter 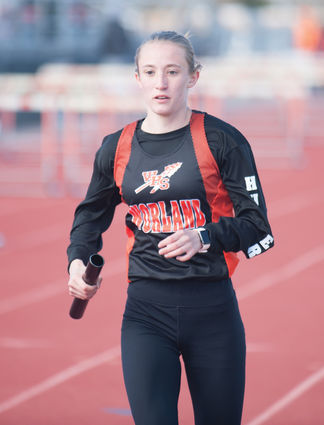 WORLAND - Since taking over WHS track and field in 2016, coach Tracey Wiley is bringing her smallest group of athletes to the 3A State meet but that does not mean they this group will be pushovers. A combined 14 Warriors and Lady Warriors will be competing at state this weekend and will certainly be in the hunt for some medals in their respective events.

"It's the smallest group I've ever taken," said Wiley. "I've got a lot of young kids and the West [regional meet] was very tough this year. I took 14 underclassmen girls out of 18 and 14 underclassmen boys out of 21. Looking at the East [regional meet] results and had we been competing in that meet I'd be taking twice the kids I am now. That's just how the cards fall, nothing we can do about it. Being a young team, I visited with them about keeping their confidence. It's tough running against those juniors and seniors."

As Wiley talked about, the 3A West was very competitive this year. There were talented upperclassmen from every school who weren't able to make it to state. Even with the tough 3A West field, the young Worland team battled during the two-day meet in Pinedale.

"It was still a good meet overall, we had some good individual things happen. In the past, I've had double-digit senior boys and eight to nine senior girls. This year I only had two senior girls and six senior boys. It's a growth year and this eighth-grade group coming up is a good track group and we'll keep plugging along," said Wiley.

Team-wise, neither the Warriors or Lady Warriors scored enough points to get a top-three finish but that does not mean Worland was without highlights.

Senior Porter Harman took second in the 1600-meter and his brother, sophomore Cole Harman, jumped a personal best 6-2 in the high jump for a second-place finish.

"Denali got sixth and from third to sixth place they go on misses and she had a shot at moving up. She's excited and has goals for state. She's sitting third in state right now, that's pretty cool. Hailee Hunter was sixth in the mile and eighth in the 800. She just fought and fought and I was so glad she decided to come out and run track her senior year.

Wiley was also impressed with two of her freshman athletes Maren Cottrell and Jonathan Nicholas. Cottrell and Nicholas did not qualify for state, only the top eight from regionals do so, but they did end their seasons with personal records.

"Maren Cottrell was 13th in the discus, only the top eight go to state, and for her to be out by not many, as a freshman. We're looking for good things from her. Jonathan Nicholas had a good PR in the pole vault and had a foot PR. That's pretty good because he's only a freshman," said Wiley.