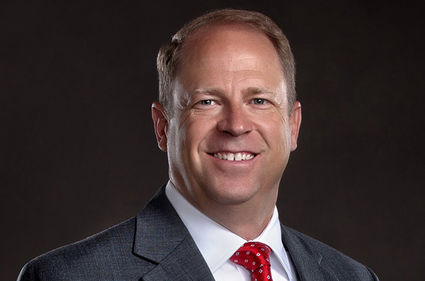 Secretary of State Ed Buchanan is seeking a judgeship just seven months after winning election to his statewide office and a judicial commission has submitted his name and two others for Gov. Mark Gordon's consideration.

Buchanan put in an application with Wyoming's Judicial Nominating Commission for a vacant circuit court judgeship in Goshen County. He was one of three names selected by the commission. The names now go to Gordon, who has 30 days to select a candidate.

The other two candidates are Patricia Bennett, a clerk at the Wyoming Supreme Court, and Nathaniel Hibben, a Torrington lawyer who is current president-elect of the Wyoming State Bar.

If he chooses Buchanan, Gordon will then have the opportunity to fill one of the five top statewide elected offices in his first year on the job. Buchanan's selection for the judgeship would trigger a process in which Gordon would pick from three recommendations advanced to him by the Wyoming Republican Party.

The previous vacancy in the secretary's office came after former Secretary of State Ed Murray resigned following allegations of sexual misconduct. After his appointment Buchanan ran successfully for the position in 2018. He won with 137,026 votes.

Executive Director of the Wyoming Bar Sharon Wilkinson said in her 17 years at that organization she had never seen a sitting statewide elected official apply for a vacant judgeship.

The Eighth Judicial District, Goshen County court is housed in Torrington, where Buchanan previously lived and practiced law. The move would carry a pay increase for Buchanan. The secretary of state earns $92,000 a year according to statute. When a new law passed by the Legislature goes into effect on July 1, a circuit court judge will earn $145,000 a year.

In a statement, Buchanan said he "felt called" to serve as a judge. "I did not lightly consider this step in putting my name forward," Buchanan said in the statement. "Such a step came after prayer and careful consideration of the needs of the State of Wyoming, my family, and the citizens of Goshen County."

Should he be selected, Buchanan said, the former Goshen County representative and speaker of the house will have completed the trifecta in Wyoming's three branches of government - legislative, executive and now judicial.

The choice was not an easy one, Buchanan's statement read.

"I faced the impossible choice knowing that I could serve my state and community in Goshen County through the Judicial System," it reads, "while also struggling with the fact that I love the work of the Secretary of State's Office.

"Ultimately, the call to serve Goshen County as a judge was strong, but the decision was made knowing that my staff at the Secretary of State's Office are prepared to smoothly transition and seamlessly accommodate the arrival of an appointed Secretary of State, if that time comes," the statement reads.

Buchanan said he would "honor" Gordon's choice of judge.

The outgoing Goshen County judge Randal Arp announced his retirement in effective in July. Arp's wife Pat announced shortly after her husband revealed his plans that she, too, would retire from a long term of public service, most recently serving as Gordon's chief of staff.