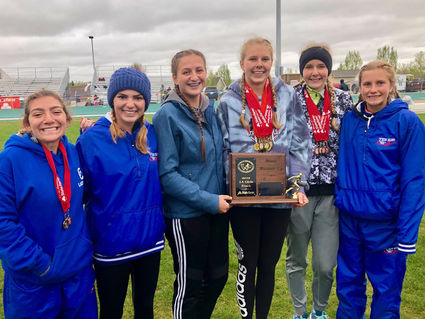 The Lady Pioneers hold up their second-place trophy from the 1A State track and field meet on May 18 at Kelly Walsh High School in Casper. Pictured are, l-r, Molly Charney, Payton Casteel, Kinley Erickson, Kelli Holiday, Lindsey Holiday and Elizabeth Lungren.

TEN SLEEP - For the second consecutive season, the Ten Sleep Lady Pioneers finished second as a team at the 1A State track and field meet in Casper on May 16-18. It was a terrific sendoff for Ten Sleep seniors Kinley Erickson and Kelli Holiday, the latter of which ends her career with 14 state championship medals.

In terms of school population, Ten Sleep has always been one of Wyoming's smallest schools. To have one of their own achieve so much and reach such historic heights is a point of pride for Ten Sleep and the TSHS track and field program.

"She gave us all sincere big, long hugs afterward, and she really put an exclamation point on her career. It hasn't been easy but she's put in a lot of work and was able to do the things she did because of that work," said TSHS track and field coach Desiree Egger.

Holiday won the 400-meter dash, the 800-meter run, the 1600-meter run and was on the sprint medley relay team, with Elizabeth Lungren, Molly Charney, Lindsey Holiday, that also finished first. Winning the 800 meters and 1600 meters was another historic moment for Holiday. She has won both events since her freshman season, a feat that has not been pulled off at the 1A level since Diane Rauth of Hulett did it from 1987-90.

Earning back-to-back seasons as 1A State runners-up is a testament, from top to bottom, to how athletic these Lady Pioneer teams have been. Last season, they were able to comfortably lock up second place, this season was a different story.

Hanna-Elk Mountain (fifth), Kaycee (fourth), Lingle-Fort Laramie (third) and Ten Sleep were all separated by eight points. On the meet's final day the Lady Pioneers needed to take care of business while also getting some help.

The Lady Pioneers got the help they needed with Saratoga finishing second in the 4x400-meter relay and taking points away from Kaycee, Lingle-Ft. Laramie and H.E.M.

Ten Sleep went on to do their part by picking up the necessary points, and one of the biggest points scored came from junior Molly Charney when she finished seventh in the 400-meter dash, earning her team two points.

Those two results swing things in favor of the Lady Pioneers, giving them 58 points for the meet while third-place Lingle-Ft. Laramie had 54.

"The girls came in and did what they needed to do to secure our spot at state. It came down to a numbers game and we didn't have anything secure. As a team they rallied and did well," said Egger. "Molly placing in the 400 and getting those points helped and the 4x400 ended as we wanted it to with Saratoga taking some numbers away Kaycee and Lingle-Fort Laramie."

The grand stage of state track can scramble the nerves of even the most experienced athletes. Even though a few athletes let their nerves get the best of them, Egger was impressed with how her team handled state.

And for those who had their nerves affect them, Egger believes it's a good lesson to learn and something for her younger athletes to hurdle next season.

"There are always nerves going into state, even for our older girls. Liz [Elizabeth Lungren] didn't perform like we thought but it's all a learning experience for them. I'd rather have Liz get nervous now as a sophomore so she knows how to get over that hump during the next two seasons.

"The most important thing they can get out of it is having those expectations. Before, when we weren't a winning team, you kind of just did the best you could. Now there's a little more drive to sustain this success," said Egger.

As young as the Lady Pioneers were at state, the Pioneers were even younger with three freshmen and a sophomore. Boe Nichols, the team's lone sophomore, led the way for Ten Sleep at state finishing second in the 400-meter dash, fifth in the 200-meter dash and 800-meter run and was on the sprint medley team, with Asher Lyman, Tim Nichols and Brian Shoopman, that finished fourth.

"His tenacity is great, he had a big week and tried hard in every event. There's still room for improvement for him which is nice. He's a man of few words but I think track is his thing. He can go to school on a scholarship and he's going to keep pushing himself to get better," said Egger when talking about Boe Nichols.

Getting a taste of state and seeing teammates like Nichols succeed along with how well the Lady Pioneers did, Egger believes it going to motivate those Pioneer underclassmen to join in on the act next season.

Looking back on the season and all this team has accomplished, what Egger is going to remember most is how close this group was. The comradery with this group was the best Egger's ever seen during her coaching tenure.

Egger credited the team's togetherness to Erickson and Kelli Holiday, without those two seniors bringing the team together as one. The team might not have been able to achieve all that they did this year.

"This group really had a togetherness, they were really all friends. I've had some other teams where there were groups within the groups, this year they all seemed to truly enjoy spending time together. Boys and girls, they all enjoyed each other's company. They sang on the bus together and just fun stuff like that. There was no separation and were really one team.

"Everyone contributed to the team and they all encouraged each other. I think that has to do with the culture the upperclassmen have built and they created this friendship among the team," said Egger.

Point scorers from the 1A State meet are as follows.