CHEYENNE – It was earlier this month when Heather Osterman received the good news from Google. 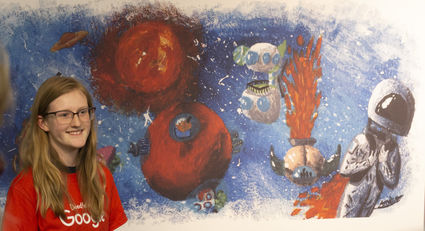 Amelia Osterman is congratulated by her family at McCormick Junior High School after being named the Wyoming winner of the "Doodle for Google" contest. Votes are now being cast to select five finalists to be considered for national honors.

CHEYENNE – It was earlier this month when Heather Osterman received the good news from Google.

Her daughter, Amelia Osterman, had been chosen as the Wyoming winner of the Doodle for Google contest.

For the ecstatic mother, this both came as a wonderful surprise, yet not a major shock, since her daughter has shown a proficiency in art since she was young.

"This has been a long journey for her," Heather Osterman said Thursday. "She tried to enter the contest about three years ago, but she missed the deadline. So, it was fun this time to see her get it done and get it submitted. We actually found out on her birthday, May 6, so this is a long-awaited birthday present for her."

While she was elated to find out the news her daughter was the Wyoming winner, the biggest challenge was keeping it a secret. For each of the 53 students chosen as winners in the competition (from all 50 states and three territories), representatives from Google would go to their respective schools and host an assembly.

But the catch was that Amelia and her fellow competitors weren't allowed to know they won the doodle contest until the representatives showed up for the assembly. Heather Osterman admitted she couldn't even tell the majority of the extended family until last week. She worried that since they're all so close-knit, someone would accidentally spill the beans to Amelia before the Thursday afternoon gathering at Cheyenne's McCormick Junior High.

When Heather Osterman talked with the Wyoming Tribune Eagle, Amelia still had no idea she was about to receive the award. But Heather Osterman knew her daughter would be floored when she finally heard the news in the next 20 minutes.

"Amelia is an amazing artist," she said. "I'm just glad she's able to be recognized for her efforts and her talent. She's definitely going to be surprised. She told her dad she's been checking the computer every day to see if Google had made a decision."

She gave major credit to both Google and Laramie County School District 1, the former for making the presentation such a fantastic spectacle and the latter for always supporting Amelia when she needed it the most and for always backing the arts department.

The prompt Amelia and thousands of other students in kindergarten through 12th grade followed for the contest was to redesign the Google logo while being inspired by the theme "When I grow up, I hope ..."

Although Amelia is one of the 53 winners, her journey isn't done yet. Monday through Friday of next week, people across the United States can vote for their favorite doodle from all 53 contestants at http://www.google.com/doodle4google/vote.html. The public vote will determine the five national finalists (one in each grade group).

Google will announce the finalists in June, and each winner will have their image featured on the Google homepage for a day. The national winner will also receive a $30,000 scholarship, and his or her school will receive a $50,000 technology package toward the establishment or improvement of a computer lab or technology program.

During the half-hour presentation Thursday afternoon, two representatives from Google handed out Doodle for Google T-shirts to all of the eighth-graders from McCormick before finally announcing Amelia was the Wyoming winner. They gave three hints to the students to try and guess who the recipient was, which tipped off Amelia.

She was excited she won, but she noted she wasn't expecting it.

"When I saw the answer to the first hint, I realized my sister had asked me that exact question and that was my response," she said. "I think it would be cool to be on the Doodle team, but I'm not sure what I want to do after high school or college yet. I really like art and graphic design, though."

Her mother also added that Amelia has an interest in writing, noting that she thinks her daughter could grow up to be an author who illustrates her own work.

For her efforts, the Google employees displayed a large print of her design, a space-themed image with the Google logo hidden in it. She also received a tote bag and T-shirt, both of which had her design emblazoned on it, as well as a Chromebook laptop.

Amelia said it took around 24 hours total to create her design.

"I just really enjoy doing art," she said. "I think other students should definitely try out the Doodle for Google contest at some point, though. Even if you don't make it, it's still a lot fun."