Weyer places second in the pole vault at 3A State meet 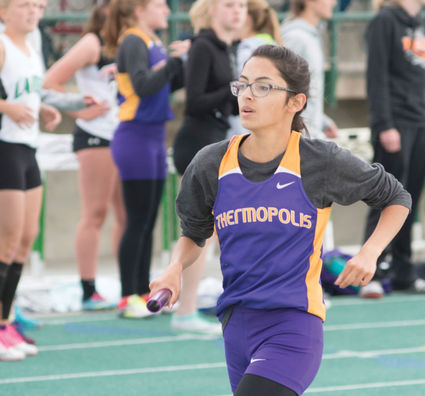 Lady Bobcat Hallie Martinez carries the baton during her leg of the 4x800-meter relay at the 3A State track and field meet at Kelly Walsh High School in Casper on May 17.

THERMOPOLIS - The Wyoming track and field season came to an end with the state meet on May 18 in Casper, and while it took a few weeks to get to full strength the Hot Springs County High School Bobcats and Lady Bobcats capped it off on a promising note.

"The weather wasn't stellar but the kids were troopers and didn't let it get the better of them. All of them went out and gave it their best effort, they endured. I was really pleased that we got so many up on the podium," said HSCHS track and field coach Amiee Kay.

Lady Bobcat Olivia Weyer cleared 10-6 in the pole vault earning her a second-place finish, All-State honors (aathlete needs to finish in the top two of their event to earn All-State) and set a personal record as well.

Weyer was beaten out by Pinedale's Madison Friend, but Friend was a senior and by looking at the rest of the 3A field, Weyer will certainly be among the favorites to the 3A girls pole vaulting championship in 2020.

"That was exciting for sure, he's now an All-State pole vaulter and that's incredible," said Kay. "She's already got a goal set for next year. We got some new poles at the end of the season, Oliva got to use them at regionals and state and it definitely helped."

Other standouts for Thermopolis were Lady Bobcat McKenna Bomengen who placed in all three of her events, the 800-meter, 1600-meter and 3200-meter runs. Bobcat Kolby George made it to the podium in the 1600.

Out of the 17 athletes Kay took to Casper a majority of her team found their way to the podium. Considering how young the group was, Kolby George was the only senior.

"There's going to be a good core group with state experience coming back next year," said Kay. "Having so many make the podium, I think half the team made it up on the podium. McKenna Bomengen made it on the podium on all three of her events and that was exciting. Julie Johnson placed as a freshman in the long jump.

"The boys 4x400 team placed and we had quite a few personal records set. Our pole vaulters set a lot of PRs, Olivia broke her PR by a foot, Blake set a PR and just missed placing."

The number of personal records each athlete set this season impressed Kay and she figures next season, the PRs set this year could push them closer to next season's state qualifying marks.

"I really played up the idea that the personal records are what shows that the kids continue to work hard and get better, even if they weren't always getting the points. They were focusing on getting those records and personal growth, if they can continue to work on that hopefully they'll be able to get qualified next year," said Kay.

Kay also took time to praise seniors Ethan Becher and George for their hard work all four seasons in the program and for the valuable leadership they provided this season.

"Both are super hard-working kids and fun to work with. They have a nice balance of working hard and having fun. Kolby is another one where if you look at his progress, from the time he was a freshman to his senior year, there was always this steady growth. Every year he was getting physically stronger and kept bringing more and more mental toughness to the distance runs. He was able to beat Porter [Harman of Worland] in one of his races and those two have always had a friendly competition. Kolby definitely felt good about how he ended it, he ended on a high note.

"Ethan, for a kid who just had one challenge after another with his injuries, I really appreciated his positive attitude. Even after his injury, he continued to help with practice, he'd help with hurdles or high jump. He packed coolers for our regional and state meets," she said.

Continued Kay about Becher's college prospects, "He's not giving up, I'm not sure but I think he's still working with Chadron to run track for them. He didn't have a scholarship but he's going to try and walk-on. He's definitely got some grit and he's all about working hard to get back into the game. I'm not counting him out.

As fun as this season was for Kay, this will also be her last as head coach of the program. At the end of the season, Kay decided to step down from the position. It was a tough decision for Kay to make, consider all the bonds she formed with her athletes, but in the end she thought it was for the best.

"I definitely acquired a new appreciation for Ernie Mecca and all he did running this program. The organization of it I got better at but it can be overwhelming at times. I'm stepping down as the head coach of track. I felt like I wasn't doing a good enough job at pretty much anything. So I'm going to let it go, the kids knew about it and we talked about it at the end of the season.

"It's absolutely going to be hard to walk away from it because the thing about coaching is you build relationships with the kids that's different from what you'd get in the classroom. They made my decision tough because they're just incredible kids. I know that Ernie Mecca spoiled me because I got to just come to work every day and work with the very best kids. It was an experience, I did my best and learned a lot. I had some great assistant coaches and I appreciated everything they did for me."

No matter who steps into the role as head coach of the HSCHS track and field team, Kay figures they will have an embarrassment of riches to work with.

"Whoever ends up taking over will be inheriting some really great kids and some strong leaders. The kids will definitely make the most of whoever the next coach will be. When you have different coaches with different perspective it just makes you a well-rounded athlete," she said. "I know some kids are bummed that I'm leaving but I keep telling them to take advantage of the new perspective you get from a new coach."

Point scorers from the 3A State meet are as follows.