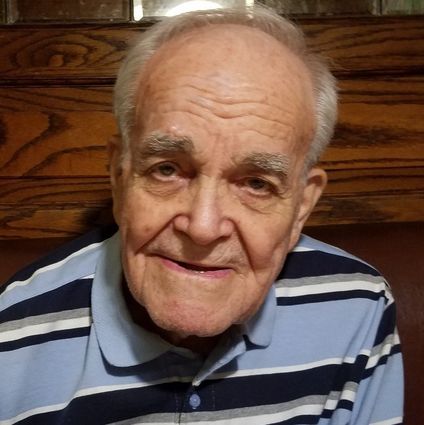 Peter "Pete" Galovich, 92, of Rancho Palos Verdes, California passed away the evening of June 8th, 2019 surrounded by his four children.

Pete was born on November 19th, 1926 in the Wyoming mining community of Poposia to Mane "Mike" and Boja (Radakovich) Galovich. He and his family moved to Thermopolis, Wyoming when he was three and remained there through his youth. Pete fondly shared stories of his childhood and spoke proudly of his parents, sisters, and brothers. Life could often be challenging as it was the Depression followed by the war years, but he found joy in many things: family and friends; school, athletics, work, and play; beloved pets and farm animals; and the local community.

An important goal for Pete was college and the opportunities to which it could lead. He enrolled at the University of Wyoming (UW) shortly after graduating from high school, but then WWII interrupted his time in Laramie and he was drafted into military service. After training on the mainland, Pete shipped overseas on a transport ship, leaving Monterrey, California for the Philippine Islands. In 1946, he received an honorable discharge from the U.S. Army with a sergeant's rank and then soon returned to UW where he completed his bachelor's degree in mechanical engineering in 1950.

Pete began his professional career in Kansas with Beechcraft and then moved to Seattle where he worked with Boeing. However, he was not fond of the gray and wet weather and made frequent trips back to Wyoming where he eventually met his future wife, Joan Nadine Chapman, to whom he was married for 49 years until her passing in 2002.

Pete and Joan moved to Southern California in 1953 where he continued to work in the aerospace industry, primarily with North American Aviation, which later became North American Rockwell and then Rockwell International. During that time, Pete worked on many technologically advanced programs including the X15 suborbital ship, the T39 trainer, B70 high altitude long-range bomber, the Apollo and Apollo-Soyuz space programs, the B1 long-range bomber, and the Space Shuttle. His analytical abilities, depth of knowledge in a number of engineering and mathematical disciplines, and attention to detail were highly valued and he contributed in a variety of design areas.

Pete retired in 1989 and spent his "golden years" doing what he enjoyed most - traveling and visiting family. Meals were seldom brief and much time was spent at the table discussing family and other history, and the current goings-on in politics, Europe, and the rest of the world.

Pete always found great joy in life. He loved family, was extremely proud of his children and grandchildren, and enjoyed connecting with old friends. His memory was exceptional, recalling minute details of people, places, and experiences. Although always aware of and knowledgeable about what was going on day-to-day, he enjoyed "getting away" to camp, hunt, fish, and spend time in the outdoors, a passion he passed on to his children and their children. Pete had a profound appreciation of wildlife and the natural world, even the birds, lizards, raccoons, skunks, squirrels, opossums, and other "night creatures" (Pete's words) that he shared his suburban property with. His family continues to marvel at - and seeks inspiration from - the ability and desire he had to support and assist all living things.

Dad, Grandpa, Uncle Pete, Pete: you generously gave us so much and words cannot express how much you were loved and will be missed!

Graveside services will be held at the Riverside Cemetery in Thermopolis, Wyoming at 2 PM on Thursday, June 20th, 2019. The family requests that in remembrance you think daily of your family and friends, and others we share our lives with.