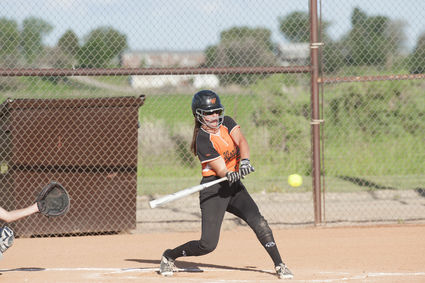 Wildfire Carmyn Buckman lines up the ball during a game against Cody on June 4 at Newell Sargent Park in Worland.

WORLAND - It is not how you start but how you finish, the Worland Wildfires 18U girls softball team lived out that sports cliché last weekend in Lander on June 22-23. Playing in a three-team tournament, the Wildfires closed out the tourney on a three-game winning streak as they went on to win the championship.

"They got on a streak and there was no stopping them when they got to that point. It was awesome," said Wildfires 18U coach Dave Coronado.

Worland downed Riverton 13-3 to move on to the championship game against level. As it was a double elimination tournament, the Wildfires would have to defeat Lander twice in order to win the tournament.

Thankfully for the Wildfires, their bats, still hot from the Riverton game, were more than ready to go.

"Just the last three games alone we scored 45 runs. To hit like that – Lander shut us down the day before and we only scored six runs against them, all the teams were pretty even and then we got on that roll. It was nice to get that going," said Coronado.

After falling into a 6-0 hole in the first inning, the Wildfires outscored Lander 19-5 to take Game 1, 19-11. Still feeling it at the plate, the Wildfires dominated Lander on their way to a 13-2 championship victory.

In their final three games of the tournament, the Wildfires outscored their opponents 45-16.

Coronado credited infielder Carmyn Buckman for getting the Wildfires offense going in Game 1 of the championship. Buckman went yard and hit the ball so well, that there was no doubt where the ball was heading.

After Buckman's home run, the rest of the Wildfires kept it going at the plate.

"Lander had us down 6-0, we scored three and in the second inning, Carmyn hit that home run and from that point on we kept it going. As soon as Carmyn connected you knew that ball was gone. Then a couple of other girls hit bombs to the wall. The girls were just hitting the ball all over the place, it was amazing," he said.

Wildfire pitcher Brooke Hellyer had herself a tournament and was crucial in the team's final three games, picking up the W from mound in all three games. In the decisive Game 2 of the championship, she gave up only two hits and had five Ks in four innings of work.

Feeding off the dominance of Hellyer, the Wildfire defense played their best ball of the season, logging only three errors during that three-game stretch.

"The last three games Brooke dominated. There was some talk going from Lander and from then on she got the eye of the tiger and she just dominated, it was great.

"Then defensively we made those basic plays and it shut them down, we only made two or three errors over the last three games. It was good to see their confidence growing to the point we are figuring out our best positions," said Coronado. "It was good, we missed Zoe [Fernandez] and Rylee [Wagner] because they're on vacation with their families. So we basically thrived off Brooke over the weekend, and she had it. It was good to see that again."

The entire tournament was a great experience for the Wildfires and coaches alike, from celebrating Buckman's home run, continuing to build better team chemistry and, of course, the winning.

"That was something that they knew was going to come and when she did that the girls were just as excited as Carmyn was when she raced around the bases," said Coronado when talking about the team celebrating Buckman's home run. "The key thing from last week was their defense. [Infielders] Vivian [Mosbroker] and Sayge [Mascaro] have finally played enough games together that they're starting to build that chemistry where they know where the other is going to be and backing each other up.

"The girls are having fun and they're willing to play wherever we need them. The team chemistry is great, they all have the same goal to get better every time we're out there. And they know that we have a chance to be really good as we building for the ultimate goal of playing for a championship again."

The Wildfires turn their focus to hosting their annual home tournament this weekend on June 29-30 at Newell Sargent Park. Saturday's games will be pool play and Sunday, single-elimination bracket play. The Wildfires are set to play at 1:30 p.m. and 4:30 p.m. Saturday, then Sunday the tournament will begin at 8 a.m.

The Wildfire 12U team will also be in action during the home tournament, playing games at 9 a.m. and 12:30 p.m. on Saturday, then jumping into bracket play on Sunday at 8 a.m.

For the 18U Wildfires, continuing to build off the success from the Lander tournament is the primary emphasis for this weekend.

"We're going to have our top three pitchers and ride with whoever is hot, kind of the way Brooke did last week. We've got five or six girls that have the power to drive the ball and hit it consistently. Ivey [Roberts] hit the ball well too, I can't say enough about her. She had two games where she had three hits, she's doing great. You can start to see that confidence in her and when she steps to the plate she knows she's going to hit the ball," said Coronado.