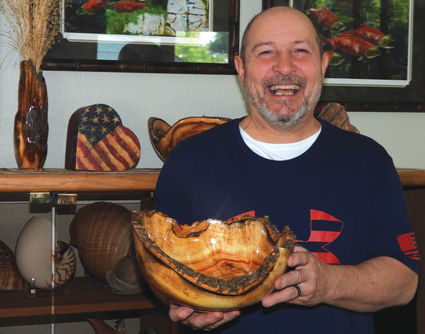 "I never expected this. As an artist you always hope that your stuff will be recognized and it just kind of validates all the hard work that I have been putting in and in the same token it is a motivational factor too. It kind of motivates me to want to go to the next level and keep seeing how much better I can get," King said.

King didn't win best of show for just one piece but for all his pieces presented. "My work as a whole won best of show. Along with winning this best of show I get a free booth next year, free juried fee and I will be the featured artist for next year's show which entails my name and a picture of the piece I decide to send to be featured on all their brochures, the website, the programs; I will be the cover artist," King explained.

According to the Summer Fest Arts Faire website, Summerfest Arts Faire is a juried art festival that features about 150 artists from across the country.  Mediums include painting, fiber, sculpture, pottery, photography, jewelry and more.

The Summer Fest Arts Faire is held on the Tabernacle Square and encompasses about a whole city block. One hundred sixty-five artists displayed their products for judging and sale this year. The faire is a juried event meaning that only the best of the best are approved to set up a booth and display their wares. King explained that to attempt to be part of the show he was required to send four pictures of his work along with a picture of his booth. If his work was determined to be good enough he would get in.

Juried fairs require a lot of planning on the part of the anticipated participant, especially if the participants work is their full-time job and the fairs are their main means of income.

"With a juried art show, what we literally do is we apply usually in December for the shows that we are going to try to attend the next year. It's usually a $25-$50 jury fee. Some shows will get 1,000 applicants for 150 booth spots, so if you don't get in, you don't get your money back. So a lot of times, if you want every weekend full up you have to apply to a couple different shows because you never know which ones you are going to get into. There are a few shows that we do that we are invited back and we can pay before we leave. Those are nice when you don't have to hassle with trying to find that date to fill it in. When you are doing it as your vocation it's a little bit sketchy, you only have 12 weekends in the summer," King said. He added that he does do shows in the winter but that he stays close to home, traveling just as far as Billings, Montana, due to road conditions.

Woodturning has been a part of King's life since high school. But he didn't really pursue it, even as a hobby until King's and his wife Lisa's children presented King with his first lathe about 12-13 years ago. Even then King stated that he only did woodturning as a hobby and worked with Sam Angelo in starting the Wyoming Woodturners Club.

Unfortunately, once King started turning full time, he found that he no longer had time to participate in the club that he had helped form. "Sam and I started the club. I was doing it as a hobby and when I lost my job, I just felt that the dear Lord had closed that door and had already opened this door, so we went full time woodturning, so I really don't have the time to participate in the club anymore. Sunday is for church and then I try to relax, but here lately it has been seven days a week and I think they have their meeting on Sundays," King said.

King and his wife Lisa added, "It's just kind of crazy how the dear Lord has led us down this path. As one door closes another opens and it's just whether you are willing to stay in His will and follow the path. It has been tough, it's not an easy life. I wouldn't recommend anybody quit their day job and go and try to be a professional any art thing, I would not recommend it to most people. You just have to trust in God that the money is going to come in. You have no guaranteed checks and you never know one show you can do a great show last year and go this year with anticipation of another great show and it doesn't always pan out that way. You never know what is going to happen."

King prides himself on trying to reuse wood for his projects, stating that he enjoys giving wood another shot at life. "Most of my wood is reclaimed; I try to stay in contact with tree trimmers. I will come home and there will be wood in our yard from time to time. People know that I do it and because we have lived here so long, they will just drop it in our yard or in the alley, which is nice. We have guys on the West Coast that we go to. I have a maple guy, a myrtle guy a redwood guy and I have a couple tree trimming guys that we visit. So I go out each fall and hand-select all the wood that I will be turning and naturally I use a lot of local wood too," King said.

While King is getting the recognition, he stressed that he does not do his work alone, that he and his wife are a team. "I couldn't do this without her. She literally is, I do the turning and the sanding but she does everything else. She packs it up, she puts it out on the table. I'm just there to sell it and she does all the rest," King stated.