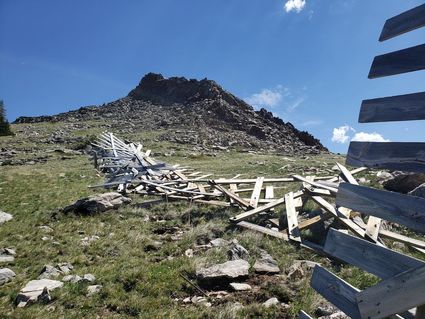 Bent rebar anchoring a snow fence on the south side of US Highway 16 on Powder River Pass shows the damage caused by an EF-1 tornado that occurred June 19.

WORLAND - The National Weather Service completed their site investigation to a storm that hit Powder River Pass on June 19 and has categorized the storm that caused damage to trees and snow fences as an EF-1 tornado.

According to a release from the NWS Riverton office, on Wednesday, June 19, a thunderstorm began to develop on the border of Park and Big Horn counties around 5 p.m. As this storm moved east it strengthened and reached its peak intensity in extreme southeastern Big Horn County. The storm crossed into Johnson County and produced a tornado on Powder River Pass in the Bighorn Mountains just before 7 p.m.

Considerable tree damage occurred along and near US Highway 16 as the tornado moved east along its 3.7 mile path. Hundreds of conifer trees were uprooted or snapped at their trunks. Additionally, several large wooden snow fences were torn apart, with fencing debris thrown in all directions. This tornado was unusual in that it occurred at a high elevation of just under 10,000 feet along its western path.

The damage produced by this storm was consistent with an EF-1 tornado, with estimated peak winds of 110 mph. The time of the tornado was estimated by comparing the location of the damage with radar imagery, according to the NWS release.

The maximum width of the storm path was 250 yards.

This is the second tornado to hit the area in just over a year, with another hitting June 1, 2018, 10-15 miles southwest of Powder River Pass near Dull Knife Reservoir.