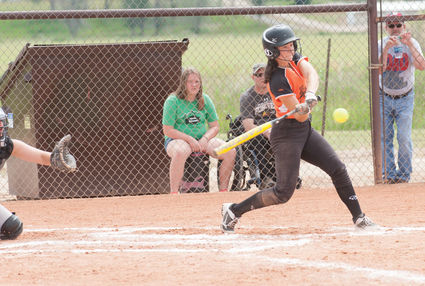 WORLAND - Leave no doubt. That might as well have been the 16U Worland Wildfires mantra during 16U B State championship tournament in Casper on July 11-14. The Wildfires made it back-to-back state titles as they blitzed through the field, beating Powell 12-0 in the championship game.

"The girls played fantastic [last] weekend," said 16U Wildfires coach Dave Coronado. "It was a weekend where everything came together. The girls were focused from the first pitch and would not be denied playing in another championship."

Originally, the Wildfires were slated to play in the 18U bracket but an injury to Raelynn Fronk, the team's lone 17-year-old, allowed them to move into the 16U bracket. The same bracket the Wildfires won last year.

The Wildfires were firing on all cylinders as they went on to outscore their opponents 73-10 in their five games played. As the scoring differential suggests, Worland mercy-ruled their opponents in four out of five games, only playing seven innings once during the tournament.

Their defense was on point as well, as they only committed 11 errors through the five games.

The Wildfires were all business from the start as they crushed Riverton in their first game. Rylee Wagner threw a no-hitter in three innings of work, on 47 pitches with two Ks and two walks.

Roberts, played lockdown defense at second base, often dashing Riverton's hopes of scoring. Said Coronado of Roberts, "Ivey was a rock defensively at second base, making several plays shutting down the Riverton offense."

Keeping it rolling, the Wildfires ran over Powell with Zoe Fernandez picking up the win from the mound. Fernandez went three innings, throwing 55 pitches with four Ks, two walks and giving up two hits. At the plate, Fernandez did damage, scoring twice and logging one triple.

Leading Worland on offense was Kennedy Johnson, who had two hits, scored three runs and led the team with four RBIs.

Johnson, Mosbroker, Brooke Hellyer and Sayge Mascaro all had two hits and scored at least three runs vs. Powell.

Heading into bracket play, the Wildfires were the No. 1-seed and played the No. 4-seed Gillette Blue Jays. Just as they had done in the previous two games, Worland's bats remained hot and their defense still stout.

The Blue Jays led 4-2 at the start of the bottom of the second inning, then Mascaro came to the plate. Having a full-count, Mascaro sent a shot deep over the center-field wall for her first career home run.

Mascaro's homerun jumpstarted the Wildfires offense, Kylie Fronk hit a triple and scored on a relay overthrow, tying the game at 4-all. Next, Winnie Smith drew a walk and Mosbroker followed her and proceeded to go yard for her first career home run. Mosbroker's homerun gave Worland the lead at 6-4, and they never looked back from thereon.

Mosbroker went 3-3, scoring three runs with a home run, a double and four RBIs; Carmyn Buckman was 2-4, with one run scored, a triple and two RBIs; and Sayge Mascaro was

The Wildfires semifinal matchup was their toughest game of the tournament. It wasn't until the bottom of the sixth inning that the Wildfire bats got going.

"We had six consecutive hits in the bottom of the sixth with Raychel Duffy adding a key single in the rally," said Coronado.

Hellyer pitched her best game of the season, going all seven innings on 114 pitches with 10 Ks, two walks and allowing seven hits.

The Wildfires defense was key throughout the game, holding things together until their bats got going in the sixth.

"Ivey Roberts made several key catches in right field, Kennedy at second base made several key stops picking off a runner at second on a throw from third basemen Kylie to stop a Cobra rally. Carmyn was a wall behind the plate, allowing only one passed ball all game. The Wildfires only committed 2 errors in the game," said Coronado.

Not letting the previous tough game affect their play, the Wildfires made quick work of Powell by ending it in three innings. Wagner was the winning pitcher, adding a shutout to her no-hitter, going three innings with two Ks, two walks and allowing two hits.

The Wildfires drew eight walks from the Powell pitchers and got four hits, while Powell committed six errors, in the win.

"The girls earned their second consecutive 16 U title, making it three years in a row playing in the championship game. They earned rings instead of patches this year and loved them along with a team plaque."

"The girls were on a mission and were led on and off the field by Mascaro, Mosbroker and Hellyer. The Wildfires represented the city of Worland extremely well not only on the field but off the field as several other teams around the state cheered them on in victory," said Coronado.

The Wildfires will enjoy their second consecutive state championship for the next few weeks. After that, it will be back to work as they prepare for the fall ball season.