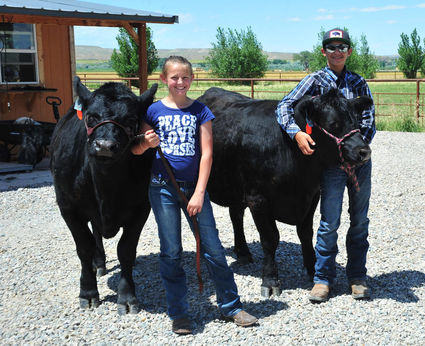 Paige Lungren and her steer Lloyd, and Owen Lungren and his steer Julio, take a break from training for fair to pose for a picture last week.

WORLAND - Next week's Washakie County Fair will be the second for the brother-sister Lungren duo, Owen and Paige.

Both started in 4-H last year, both having swine projects, while Paige also added cake decorating as a 4-H project and had a rabbit project.

Owen, 14, and Paige, 11, are the children of Sarah and Clint Lungren of Worland. Paige said she has been asking her mother for a few years to join 4-H and finally last year, after she was asked by Trent Loos during WESTI Ag Days about being in 4-H, Sarah Lungren consented.

Sarah said she wanted to wait until Owen and Paige were older and could handle the responsibility of an animal project on their own.

"I was dragging my feet. I wanted to make sure they were old enough to handle it. It's a lot more work on the parents when [the 4-H members] are younger.

Both Sarah and Clint had experience in 4-H, Sarah with sheep and Clint with steers and sheep.

When they started off last year they purchased three swine projects. This year they switched from swine to steers, selecting calves from their own herd with the help of Betsy DeBolt.

Sarah Lungren said, "Betsy came out to show them what to look for in a show steer."

And what do they look for? Owen and Paige explained that you look for a flat back, not too high flank, no problem with the legs and for a show steer you don't want a lot of hair so you need to check the tail when selecting a steer in the winter. You also don't want the steer too fleshy in the brisket area.

They selected two steers, originally naming them after the "Dumb and Dumber" characters Lloyd and Harry but Owen changed his steer's name to Julio instead of Harry.

Training began a few months after selecting the calves with some halter training. Serious training began in May, Sarah Lungren said.

They rinse off their steers and walk them three times a day, getting them used to the lead.

Each night they wash and brush the steers and practice setting them up for the judges.

The Lungrens and the steers take Sunday mornings off from training.

After a rinse last Friday afternoon, the Lungrens also took a break from more rinsing, wanting to make sure the steers' hides were dry for the ultrasound testing on Monday in preparation for fair week.

Both steers are "quite tame," Sarah said, but Lloyd has proven to be a bit stubborn for Paige.

This week, the Lungrens were planning on working again with Betsy DeBolt, to help prepare their steers for the actual show. They said they would be working in the show arena at the fairgrounds. Sarah Lungren said both steers are used to noise and distractions from their farm just south of Worland.

They've also changed the feed for the steers giving them finisher feed lately.

They will compete in showmanship, in the market classes and the born and raised class at the county fair. The beef show is at 2 p.m. next Thursday, Aug. 1, in the show arena at the Washakie County Fairgrounds.

While Owen and Paige have named their steers, as they did their swine - Loosy Goosey (after Trent Loos) and Max - they also know that the ultimate goal is to sell them for market.

They eat their own beef already so they understand the end game and while they may get attached, Paige Lungren, understands the business side - selling the animals means money in your pocket. She said she was pleased with the price she received for her swine at last year's junior livestock sale.

This year's junior livestock sale is Saturday at 2 p.m. in the sale barn.

While they prepare for this year's fair, they are already looking ahead to next year with both wanting to continuing working with steers. Owen said he may add a breeding heifer. He has submitted an application for the NILE Merit Heifer Award.

Any youth that is between the ages of 12 and 15 as of June 28 and a 4-H or FFA member may enter. Project participants will be selected by October and will be recognized at the NILE (Northern International Livestock Exposition) Stock Show in October.

Each program participant will own their heifer jointly with NILE until the completion of the program, at which time NILE officials will sign off and the participant will take full ownership of the heifer. During the program duration, participants are responsible for raising the heifer, arranging for her bred, completing the record keeping procedure and bringing the animal back one year later as a bred replacement heifer for exhibit at the NILE Stock Show.

Paige dropped cake decorating after last year but kept Charlie, a lion-head rabbit. She got Charlie last year from the Casper FFA, noting Charlie was being bullied by the other rabbits.

As for Charlie's care, Paige brushes him, clips his nails and runs water and witch hazel through his hair. 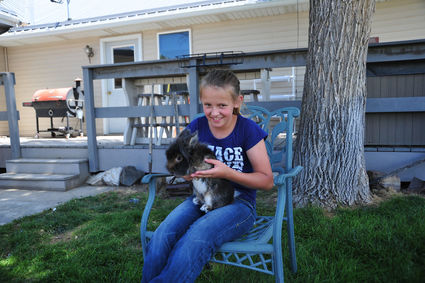 Paige Lungren will also be at the Washakie County Fair next week with her rabbit Charlie.

She said preparing for the rabbit show is different because it is a lot more verbal presentation than showing steer or swine.

To gain assistance for her rabbit project, the Lungrens went to YouTube, some online video chats and this year there were a few rabbit clinics in the area.

Why get involved in 4-H?

For Owen, he said the money raised through the animal projects will help pay for college and "it gives you something to do in the summer."

For Paige, in addition to gaining funds, she said it has taught her more responsibility and helped her mature. She also plans on eventually becoming involved in FFA.

For Sarah Lungren, 4-H is "not about the ribbons but about friendship and the things they learn along the way. It's about learning patience and personal growth."