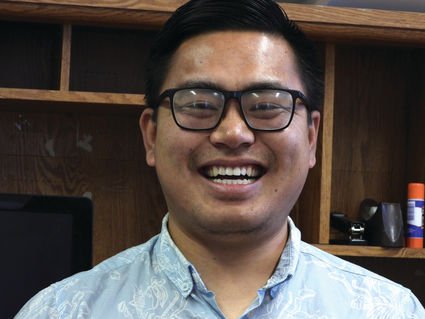 Pfoze is originally from India, growing up in Nagaland. Pfoze stated that he belongs to an ethnic community called the Naga Community where 90 percent of the population is Christian. He added that the Naga Community has a unique culture and history, much different from the rest of India, but that the community is also a part of the diverse country of India.

The first calling from God came to Pfoze when he was a boy. "I was 10 years old when I felt God talk to me and that experience left a mark in my heart that grew stronger and stronger with time. When I finished college I was completely sure that God called me to ministry and God called me to serve the church as a pastor. So I started my theological training after college. I did my undergrad in theology, that's how I started my journey," Pfoze said.

Before seminary Pfoze studied science at a college in Nagaland. He then went to Logos College for his undergraduate studies and earned his Master of Divinity at Oriental Theological Seminary in India.

In 2017, Pfoze applied to Candler School of Theology in Georgia, a Methodist Seminary. Upon receiving a scholarship Pfoze worked on his Master of Theological studies and graduated in May, 2019.

Upon graduation Pfoze decided that he wanted to work in a church and proceeded to look for an available position.

When Pfoze learned that the Worland and Ten Sleep United Methodist churches had an open position and after talking with the church community members, Pfoze said that he knew that this was the place where he was supposed to be. "I felt that this is the place that God wants me to be, the people were friendly, kind and showed willingness to accept me and work with me. That attracted me and also confirmed that this is where God wants me to work," Pfoze said.

Pfoze is an avid fan of soccer and played at the high school and collegiate level. He also enjoys watching movies, TV (soccer especially) and music, teaching himself how to play the guitar at the early age of 9 or 10 years old.