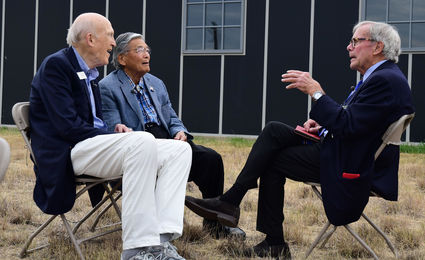 POWELL - As many Park County residents enjoyed the sights and sounds of the Park County Fair over the weekend of July 27 and 28, a celebration of a different sort was taking place at the Heart Mountain Interpretive Center.

For the eighth consecutive year, the center welcomed back former incarcerees and their families to its annual Heart Mountain Pilgrimage, an event that serves as a remembrance of a dark chapter in American history.

The federal government ordered the relocation and confinement of Japanese-Americans following Japan's bombing of Pearl Harbor. Internees began arriving at the Heart Mountain Relocation Center outside of Powell on Aug. 12, 1942. The camp began a three-year tenure as a War Relocation Authority facility, one of 10 created and scattered across the country during that time; approximately 14,000 Japanese-Americans were confined at Heart Mountain until the final train left the camp in November of 1945.

The Heart Mountain Interpretive Center - designed to pass the camp's story on to future generations - opened in 2011, highlighted by the return of many surviving internees and their families. The reunion has become a yearly tradition. This year's Heart Mountain Pilgrimage drew more than 300 distinguished guests, including the Japanese ambassador to the United States, and former internees returning to reflect on the legacy of Heart Mountain.

Dakota Russell, executive director of the Interpretive Center, said there "were many, many highlights."

"... all of the events just really symbolized the reaching out and building bridges that we think is so important to stop something like the Japanese-American incarceration from ever happening again," he said.

The three-day event featured a variety of interactive activities - from educational sessions and multigenerational discussions, to guest speakers and entertainment.

"It's important when we talk about issues of race, issues of immigration and things like that, that we're not talking just about rhetoric," Russell explained. "Being able to meet these former incarcerees and talk with them, really puts a face on it, not just to issues of the past, but issues that we're facing today."

Saturday's events took place primarily at the Interpretive Center, with a speaker list including former U.S. Sen. Alan Simpson and former Secretary of Transportation Norman Mineta - himself an internee at Heart Mountain. The story of their friendship during Mineta's time at the camp has been well-documented.

Legendary newscaster Tom Brokaw, a champion of the Heart Mountain Interpretive Center and its cause since its inception, was presented with the LaDonna Zall Compassionate Witness Award (see related story). The award was established in 2017, and honors those who have helped the Japanese-American community, even though they are not directly impacted by oppression. The award is named after Zall, a Powell resident who helped build the center and curate the artifacts it holds.

Following Brokaw's presentation, David Ono, longtime co-anchor of ABC7 Eyewitness News in Los Angeles and the 2018 recipient of the LaDonna Zall Compassionate Witness Award, introduced the event's keynote speaker, retired L.A. County Superior Court Judge Lance Ito. Ono recalled the first time he interviewed Ito, who's best known for presiding over O.J. Simpson's murder trial. On the walls of Ito's courtroom were photographs of the barracks at Heart Mountain, as well as a painting of the mountain itself, created by an incarceree. Ito explained to Ono that he used the images as tools to educate potential jurors on the history of the relocation center and its significance in regard to the law.

"Lance Ito is, I think, one of the real protectors on what we need to never forget when it comes to what's happened here," Ono said.

Ito's parents - James and Toshi Nagamori Ito - met while interned at Heart Mountain, and the Ito Victory Garden is named in their honor; the garden was rededicated to the couple during Saturday's event. During his time at Heart Mountain, James Ito was the inmate superintendent of the agriculture program, and with the help of fellow displaced farmers, turned the desert surrounding the camp into fertile farmland.

Judge Ito spoke with reverence about his parents, both of whom became teachers in the L.A. Unified School District after their release from the internment camp. At the time, the Japanese-American internment was not something that was freely discussed, nor was it taught in schools. With the help of poster boards adorned with photos and charts illustrating what life was like in the camp, Judge Ito reminded the audience of the dangers inherent with letting history fall by the wayside.

"They don't teach the internment in our public schools, at least they didn't when I was growing up. Now it's about a paragraph," Ito said. "And like many, my parents did not discuss the internment experience with us. ... My mom and dad didn't want to talk about it. It was a painful thing, and the last thing they wanted to do was tell us about that."

After Toshi Nagamori Ito retired from teaching, she wrote an article for a local newsletter touching on her experience as an incarceree; she was challenged for what she wrote and called a liar. That proved to be a pivotal moment for Toshi Ito, as she went on to publish her memoir, an account of her time at Heart Mountain.

"I think that was a motivation for her, and as a result of that experience, she became a very enthusiastic storyteller," Judge Ito said of his mother.

Ito ended his address by highlighting just a few of the heroes whose actions both inside and outside the internment camp helped bring a semblance of peace and compassion to the families affected.

Russell, the executive director, said he's always pleased to see how multigenerational the Pilgrimage has become, as the younger generations begin to embrace the legacies left behind by those who came before them.

"It really is exciting to see, especially the younger people really becoming engaged with this history," he said. "In many ways, they are discovering their Japanese-American identity."

With interest in the Pilgrimage and the Heart Mountain Interpretive Center increasing every year, Russell said it's the center's hope that visitors leave the site with a firmer grasp of its legacy, as well as what can be done to ensure it never happens again.

"The big takeaway we hope resonates with people was the idea of not just a better understanding of this history, but a commitment to fight injustice wherever they see it," he said. "American democracy requires vigilance to upkeep. We can't be passive; we have to be active to make sure we're fighting these types of injustices, and that we recognize them when we see them. Not just in the past, but in the present day, as well."