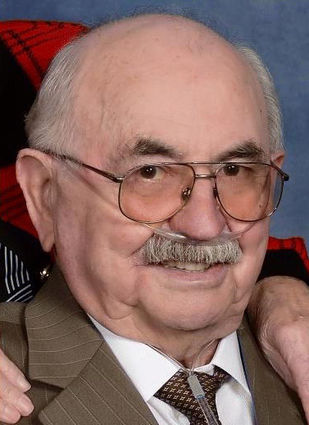 Herbert Julius Jennerich gently went to be with the Lord on Friday, July 26, 2019, under the peaceful and loving care provided by HopeWest Hospice. Herbert was born on March 21, 1927, to Julius and Emma Jennerich in Kaunas, Lithuania. His father had a butcher shop and Herbert, his two brothers (Waldemar and Ludwig), and his mother helped run the business. Julius passed away when Herbert was nine years old - but the family business continued. Faced with impending Russian invasion, Herbert and his family fled to Germany (their homeland) and lived with family in a variety of locations.

Herbert served in the German Air Force as a young man. He was captured and was a POW in France and England for a total of four years. In 1954, he moved to Oldenburg where he met the love of his life - his dear wife, Irmgard. The two were married in 1955, and in 1956 immigrated to the United States. Herbert's Aunt Kathe and Uncle John and family, and Cousin Wally, Ferdinand and family had immigrated to Worland, Wyoming earlier - so Herbert and his new bride had family upon arrival.

In 1959, their daughter, Brigitte was born. Herbert was a civil engineer and land surveyor. During his career, he worked for John Donnell and Associates, Wyoming Highway Department, and retired from Big Horn County where he served as the County Engineer.

Herbert and Irmgard lived in Worland until 1995 when they moved to Grand Junction, Colorado, to be closer to their daughter and her husband, Larry.

Herbert was always fascinated with technology. When Hewlett Packard came out with programmable calculators, Herbert had to have one. He spent countless hours in the middle of the night writing engineering programs for use on these calculators. He submitted his programs to Hewlett Packard - these programs eventually were pre-programmed on future models. When personal computers made the scene, Herbert was on it! He so enjoyed "building a better mousetrap" on his computers. In his later years, sometimes the mousetrap worked and sometimes we needed to get assistance removing the mousetrap from the device.

Herbert was preceded in death by his father, his mother, and his brother Ludwig. Survivors include his wife of 64 years, Irmgard; daughter, Brigitte (Larry) Evenson; brother, Waldemar; and many cousins and extended family.