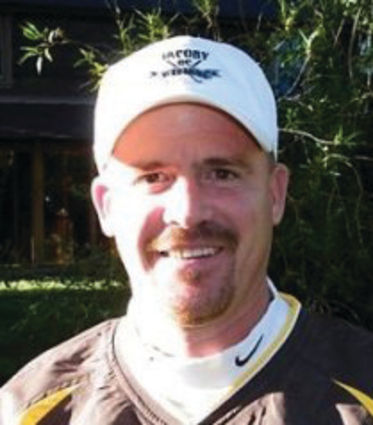 WORLAND - When Mike Propp and his Propper Golf Management got the contract to manage the Green Hills Golf Course in the fall of 2018 there was one man that Propp had in mind to become the course's new golf professional, that man is, Donnie Bjorhus.

Bjorhus and Propp have been friends a while and worked together for the last few years. Propp was the Green Hills golf pro in 2016-17 and the golf pro at the Powell Golf Club in 2018. Before coming to Worland, Bjorhus was the golf pro at the Legion Town and Country golf course in Thermopolis the past six years.

As Propp was putting together Propper Golf, he reached out to Bjorhus to and tentatively talked about Bjorhus being his golf pro at Green Hills. Then once the Worland City Council chose Propper Golf to manage Green Hills, one of the first calls Propp made was to Bjorhus to offer him the job.

"Timing-wise it worked out really well," said Bjorhus. "It was something we had talked about in casual conversation as he was trying to put things together. Mike Propp and I have known each other for a while now. When he put his company together and got the contract together to manage Green Hills, the night the council approved the contract Mike called me that night to offer me the head pro job.

"It's been good all around, going from a nine-hole course to an 18-hole facility there are so many more things you can do. You can do a league on one nine and still have the other nine open for golf. You do a league in Thermop and it shuts everything down. It's been nice and it's been a good move for us, we love the town, the course and the golf community."

Following his passion for golf, Bjorhus went through the PGA golf pro program and has been a golf pro the past eight years and of the many things he loves about his job, is the variety each day brings.

Having a new challenge each and every day is fun for Bjorhus - from the city leagues, the tournament, lessons and just making sure that every golfer that ventures out to Green Hills has a good time.

"Every day is different. That's really the reason I got out of parks and rec, I could look at a calendar and my year was planned out and it was pretty much the same from the year before.

"You have different things going on every day. One day you'll have women's league going on with some individual lessons in there too. Then tomorrow will be completely different from men's league or different things going on throughout the day," said Bjorhus. "The variety is great, one day it will be crazy busy and the day flies by. The next day could be a little bit slower that allows you to catch up on some things and catch your breath for the next event. I like that variety to every day, every week and really every season."

Making the move from a nine-hole course to an 18-hole course isn't the only thing that Bjorhus enjoys about Green Hills. In his first season at the course, the golf community continues to impress him. Whether that be just how big a draw tournaments, like the Deboyna, are at Green Hills.

"I've been impressed by a few things, the participation we've had is great. The annual Debonya tournament is huge. The number of not only out-of-town people but out-of-state people that come to play - I don't think people realize how many out-of-state people come to play in that tournament and spend three, four days here in motel rooms, at the restaurants and just spending money in Worland," said Bjorhus.

He's also impressed with how tightknit the players are, oftentimes spending hours together after a tournament or event.

"How much this is a community up here is impressive too. After an event people don't just turn in their scorecards and leave, they'll spend two, three hours up here after an event. That's a neat little thing here," said Bjorhus.

And how supportive and committed the golfers are to making sure Green Hills is one of the better courses in the state.

"Then how supportive people have been, not only of myself but of Propper Golf as a whole and everything we're trying to get accomplished here," said Bjorhus. "We want this to be a place where people love playing at and have that word spread. The people that have been supportive of that and have been willing to step up and ask what they can do to help. That's been amazing to me."

Just having that special relationship with the course's players is what makes Green Hills that much more special. Seeing that the members want to show all the Green Hills has to offer and are willing to join Bjorhus and Propper Golf to achieve the mission is only going to benefit the course.

"When it comes down to it, this is their golf course and they're just as invested in doing what they can to make it better. There's a little bit of that pride factor too in wanting to show off the course and everything they've done to be a part of it.

"They also understand this is a golf course in small-town Wyoming and we don't have dozens of maintenance workers. So they're willing to step up and help supplement our maintenance staff, to take some of the load off them, and allowing for our staff to make sure things are mowed, watered and manicured in a way they should be. It's been a good relationship all the way around, from Propper Golf to the people who use the facility," said Bjorhus.

Sharing that common goal with Green Hills golfers only makes Bjorhus and Propper Golf's vision for the course that much easier to achieve. When Propp was the golf pro at Green Hills he built a strong junior golf program and did the same thing during his time in Powell.

Bjorhus shares sentiment with Propp when it comes to having a strong junior program. It was one of the first things he focused on when he started and he's that hard work pay off as the program has grown.

"Getting, and we're starting to see this happen, the number of junior golfers to go back up. When Mike was here the junior program was strong here and that was largely in part because of Mike," said Bjorhus.

"We're starting to see that here again, the junior numbers are growing and seeing those numbers increase is good because that's the future of your course. If you can get those juniors hooked on the game your facility is going to continue to flourish."

Continuing to host more tournaments and events is another focus of Bjorhus. Not only does it raise the profile of Green Hills but it also brings business to the town of Worland.

"It gives us a chance to show people what we got and if they like it and have fun here, chances are we're going to get them back down the road," he said. "You start getting those people that aren't your normal daily people spending money at your facility and spending money in town are things we want to see continue to grow."

Some of the big tournaments upcoming are the Big Horn Basin tournament on August 10-11, which is a two-day, two-course tournament. In years past, Green Hills hosted both days but in a return to tradition Worland and Thermopolis are going to host.

On August 18, one leg of the inter-club championship, between Cody, Powell and Worland, will be held at Green Hills. The friendly competition brings the golfers from all three courses to battle it out on the links with a year's worth of bragging rights on the line. Cody won last year's inaugural event and earned the traveling trophy that sits in the clubhouse at Olive Glenn Golf and Country Club.

"Having another town involved you get more people participating and people playing your course that haven't before, and it works the same way for Thermop too," said Bjorhus of the Big Horn Basin Tournament.

Added Bjorhus about the inter-club championship, "People really enjoyed getting to play golf with people they don't normally see at those other courses and enjoying the fellowship of being out on the course.

"We said we were going to get a trophy and that it would travel around and whoever won would have plates engraved with the year they won it. I didn't know how adult golfers were going to take winning a trophy but when we presented that to the Cody golfers they went nuts. They were whooping and hollering, they popped a bottle of champagne and it was going everywhere. It was exciting and fun to see adults getting excited about winning something."

Things are going very well for Bjorhus in his first season at Green Hills and another positive to being the golf pro here is having that friendship with his boss. More often than not when people enter a job you're spending your first few months getting to know your boss. With their friendship already established Bjorhus and Propp hit the ground running.

Bjorhus and Propp both see the board the same way and while technically it is an employer-employee dynamic, Bjorhus sees it as a partnership that's looking to bring out the best of Green Hills golf course.

"We do have a good relationship and it's kind of eerie at times because we do think so much alike with how we want things to be and the vision we have for this course," said Bjorhus. "Our backgrounds are similar, we were both baseball players growing up, Mike in Casper and me in Colorado. We both went to college to play baseball and golf came to us later down the road.

"But it has been a good relationship working with Mike. He's a good, close friend of mine and he's an awesome person to work for and work with, and it's more the latter than working for."