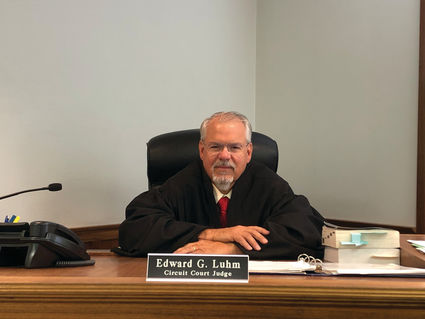 New circuit court judge Ed Luhm poses behind the bench at the courthouse in Worland.

WORLAND – Wyoming Fifth Judicial District Circuit Court Judge Ed Luhm has recently made the transition from attorney to sitting on the bench and making impactful decisions in the community.

Luhm took over the bench in January from retiring Judge Tom Harrington, and has been maintaining a busy schedule ever since, as he in charge of four different courts during the week.

Luhm is in charge of the courts in Worland, Thermopolis, Lovell and Basin.

This transition from a lawyer for 32 years to judge has been a different change of pace for him.

"Things have been going well, I have been super busy," He said. "I travel quite a bit, I travel heavily in the middle of the week and stay close to home to end the week."

Even with travelling all the time for work, he still finds time to travel during his vacation and enjoys spending time in the outdoors fishing, hiking, and hopefully hunting this upcoming fall.

Judge Luhm said he also enjoys spending his time on the bench.

After having gone to college in Laramie and New Jersey, Luhm was glad that he settled on Worland as his home nearly 32 years ago.

Moving here directly after college was a perfect fit for him, as he said it was always his dream to live in a smaller town rather than a large city, after he had moved around for the most part in his youth and settled on Littleton, Colorado, prior to moving to New Jersey to begin his collegiate career.

"I love the area and the people," he said. "I feel a real connection with the area."

Luhm said he feels that the need for lawyers in larger areas is growing faster than the supply of them coming in.

"It has been getting harder to replace all of these judges and attorneys that are either retiring or dying," he said.