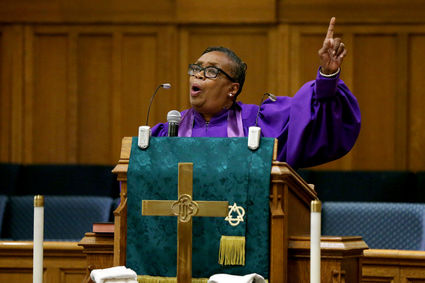 Rev. Catherine Fitzhugh, a pastor at the Unity Missionary Baptist Church, speaks during a prayer service to call for healing in the world on Saturday, Aug. 24, 2019, inside the First United Methodist Church in downtown Cheyenne. Clergy from across town came together for the short service to speak out against the recent rise in mass shootings and hate crimes.

CHEYENNE – Only by remembering the mistakes and sins of the past, can we find a way to come together and deal with the problems of today.

That was the message from a group of worshipers gathered in Cheyenne's First United Methodist Church on Saturday night for a prayer vigil. The prayer gathering led by three different congregational leaders marked 400 years since the first enslaved African was brought to a European colony in North America.

"It's part of America's history, and it's the part we often try to hide," said the Rev. Catherine Fitzhugh, a pastor with the Unity Missionary Baptist Church in Cheyenne. "All history is not good, but we can learn from the bad in history and we can do better."

Across the country, churches, civic groups and governments in recent weeks have recognized the first enslaved Africans who were brought to the English colony in Virginia in 1619. Mayor Marian Orr also made an official proclamation to acknowledge the history of slavery in America starting 400 years ago this year.

That recognition across the country and here in Cheyenne is an important step in embracing the lessons of the past and coming together as one people, said the Rev. Hilton J. McClendon Sr., pastor for God's Love and Hope Fellowship Church.

McClendon, who also serves as the Cheyenne Police Department's pastor, said only by coming to terms with the sins of the past can the country move together as one. That is why he and other religious leaders in Cheyenne have hosted prayer vigils in recent weeks.

"It's bringing about healing number one. There are some people that don't even get the history of it," McClendon said. "America is a country that accepts unity. We all built this country together, even those who were enslaved, my ancestors were enslaved, but we all built this together. And if we can keep that common cause of working together, being one and unified as one, then we can see a greater America."

McClendon said that unity is needed now more than ever, as the country deals with the rise of mass shootings and other acts of violence and hatred. But by coming together as one, by recognizing the past mistakes and learning from them, it is possible to move past this period of darkness and be a better country, he said.

The Rev. Mark Marston, the senior minister at First United, said Saturday's prayer vigil and the previous one have been focused on acknowledging that part of our shared history, and coming together to heal as one from it.

"I believe most Americans don't realize it's the 400th acknowledgment of slavery in America," Marston said. "We still have a lot of healing. The other part of that is there is a whole piece of history that Americans don't remember or don't know about. That's why I think this is so important."