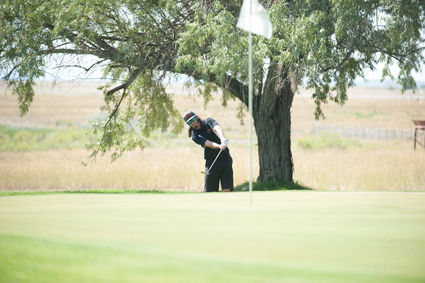 "The boys are close to setting the bar higher than we have seen here at WHS. We have six of the top 12 players in 3A, and it is unfortunate that only five can play at state," said WHS golf coach Chad Rose.

"It was great to see Karsten play a little better. He is still making fewer putts than he is used to, but I feel that will work itself out in the next couple of weeks," said Rose. "Jackson Dunham played his most consistent and most accurate golf yet, and did so after some serious swing work this weekend. It is hard to make swing adjustments when you feel so comfortable over the ball, but we are really trying to help him shoot in the 70s every time out."

Continued Rose about the boys team, "Landen really turned things around and is starting to see what he is capable of shooting each time he plays. Konnor is playing his best golf as a Warrior, and it couldn't come at a better time."

For the Lady Warriors, Robyn Horath had her best week of golf in the 2019 season, she shot a career-best 93 on Day 1 and on Day 2 bested that round with an 89, shooting a 182 and finishing fourth for the tournament.

"Robyn Horath shot her career-low round in consecutive days. It is so great to see her shoot under 90 because she has worked so hard over the last four seasons to make this leap. I think she believes she could be there every time," said Rose.

Today and tomorrow Worland is in Riverton for the Wolverine Invitational at the Riverton Country Club.