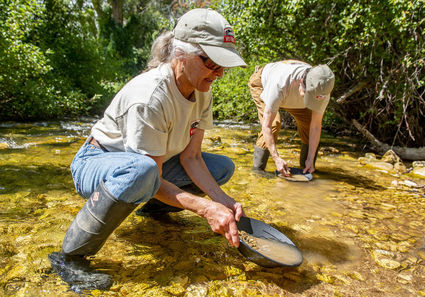 Pam Hockett and Jan Earle pan for gold in a creek in the Bighorn Mountains while showing a group of students proper panning techniques. The two volunteer at the South Pass City Historical Site, near Lander, helping teach aspiring prospectors.

POWELL - Jan Earle can still remember the first time she saw color - flakes of gold - in the bottom of her pan.

"It was like finding a lost ring or a diamond. Or seeing a spectacular butterfly for the first time," she said.

Forty-something years ago, Earle was a geologist helping to survey the South Pass for new state of Wyoming geological maps. After long hours of summer field work, she'd spend some time panning area streams. Earle was lucky enough to know boundaries of claims and recognize good areas to hunt for precious metal. It wasn't easy: She spent three seasons panning from May to September to find 10 ounces.

"I had to work very hard for my gold," she said.

Had Earle held on to all that gold, she might be sitting on a pile of cash today; the price of gold has gone up more than 500 percent in just the last 20 years, selling for more than $1,500 an ounce in late August.

But Earle was never looking to get rich.

"It was just something we did with friends for fun," she said.

She took her 10 ounces - worth about $35 an ounce at the time - and used it for a down payment on her first home decades ago.

Earle did better than many folks who poured into Wyoming in the late 1800s, seeking to strike it rich. So many people rushed to the territory it helped Wyoming become a state. Entire towns, like Atlantic and South Pass cities, sprung up almost overnight with thousands of prospectors.

Wyoming wasn't an easy place to mine. Tens of thousands worked the mining districts in nearby states like Colorado, Montana, Idaho and South Dakota.

"Because there was absolutely no easy access to Wyoming gold areas, only a few very hardy prospectors ever even put pick and shovel to the ground," says the Wyoming Prospectors Association. "The few mining operations that operated did extremely well finding huge amounts of gold."

"Most of the gold-bearing ground in Wyoming remains virgin," claims the association's website.

"We have people that spend all day digging, wanting to strike it rich," Earle said.

As the price of gold heads north, so does the interest in prospecting. At about $1,500 an ounce, interest in prospecting in Wyoming has rarely been this high since the last rush in the 1930s. Gold has been discovered in every mountain range in the state with the South Pass being the most productive. There have been claims in the Absaroka, Beartooth and Bighorn mountain ranges surrounding Powell and the Big Horn Basin as well.

One of the hardest parts of searching for gold in the Basin is knowing where the mineral can be found. And there are many regulations, not only differing between state and federal land, but between Bureau of Land Management and National Forest Service lands as well. Earle says the easiest way to educate yourself is to go with someone willing to share their knowledge.

"It's best to go with people who know, like local prospector clubs," she said.

There might not be any nuggets to find in Powell, but there's a wealth of information and available resources on gold prospecting in town. The Big Horn Basin Prospectors Association meets the second Tuesday of every month and makes monthly outings, looking for a little color or an occasional nugget.

"The club will help teach you how to pan," said Doug Butler, a Lovell resident and longtime member of the local group.

Aligning with the club also gives you access to training and equipment. Members are well versed using sluice boxes, dredges and high bank techniques, Butler said. There are currently about 25 active members, but that depends on the price of gold, he said. Another source for a wealth of information is the Wyoming Prospectors Association.

Most gold hunters are more than happy to travel to find nuggets. Butler has traveled as far as Alaska in his searches since starting.

"You can get kind of spoiled up there," he said.

On occasion, the club also pays to access claims for a day or two; on one of the recent monthly outings, they traveled to South Pass.

"It's fun," Butler said. "You have the potential to find something special."

However, Wayne Sutherland - a gemstones, metals and economic geology specialist for the Wyoming State Geological Survey - cautions not to get wrapped up in results. Through the years, Sutherland has found his share of gold, but finding color wasn't his main motivation; he was simply trying to see if gold was in the area.

"I look at it from the geological aspect," he said.

Getting outdoors was Sutherland's true reward - and he looks forward to more time afield after retirement.

"It's like fishing," he said. "Even if you don't get anything it was still a fun day."

The State Geological Survey has pamphlets explaining the relevants regulations and maps pointing to the places where gold and other precious metals have historically been found in the state. All of the information the agency offers is available online. One interactive map notes thousands of claims across the state. Sutherland still has more than a thousand claims and discoveries to add to the map, but has to work fast He's retiring in a short four months.

Sutherland points out that gold isn't the only valuable mineral available in the state.

Palladium is currently worth more per ounce than gold and prospectors are finding it in the southern part of Wyoming. Silver, copper, uranium, jade and other semiprecious gems are just a few of those being sought. Sutherland points to areas near Eagle Creek, Crandall Creek, Kirwin, the Clarks Fork River and drainages in Sunlight Basin as popular areas for prospecting near Powell. There have also been discoveries in the Bighorns: The Medicine Wheel area and Porcupine Creek both had small mining operations in the late 1800s and early 1900s.

As for Earle, she's happy to offer her knowledge of geology and prospecting to anyone who asks at the South Pass City Historical Site. "Look for where water slows down, like waterfalls, turns and where water spreads out," she said.

Number one on her top 10 suggestions: Be patient.

"You're not going to strike it rich on your first pan," she said. "It may take 10,000 pans. You have to be able to deal well with disappointment."